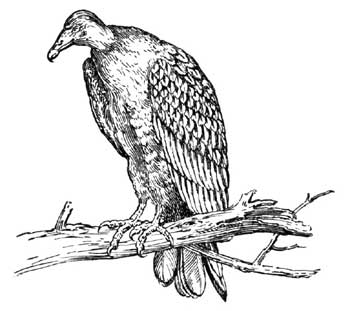 It was a long, long time ago, when the earth was very young. Trees and flowers were growing everywhere, but there were no birds. One morning the Great Spirit drew back the blanket from the door of his wigwam in the sky. He looked upon the earth and smiled, for he saw that his work was good.

"Today," thought he, "I will make big butterflies, to fly in and out among the beautiful trees and flowers of the earth. They shall sing as they fly."

Then the Great Spirit spoke, and the tree tops were full of birds,-but they had no feathers.

All day he watched them fly and listened to their songs. But their naked bodies and long legs did not please him. Before the sun had set he had made feathered suits, of every size and color, to cover them.

That night, as the birds hid their heads under their wings, the Great Spirit spoke to them. He told about the feathered suits he had made for them, and where these suits could be found.

A council was called next day by the birds. They chose Gah gah go wah, the Turkey Buzzard, to get the suits. He could fly over a long trail and not be tired.

The birds told him that if he would go, he might have the first choice of the suits of feathers, but he must try on no suit more than once.

Turkey Buzzard promised and set out toward the setting sun. Twice the sun set, and three times it rose, before he found the feathered suits. There were many of them, and they were very beautiful. He could not make up his mind which one he would like best to wear.

Then he remembered that he could try on each suit of feathers once. So he began to put them on.

The feathers of the first suit were too long. They trailed on the ground as he walked. Neither could he fly well in them. Turkey Buzzard laid that suit aside.

The next suit shone like gold. The feathers were a beautiful yellow. Turkey Buzzard put it on and strutted up and down the forest.

"Oh, how handsome I am!" he said. "But I must not keep this, for if I did, I should shine so like the face of the Great Spirit, that all the other birds would see me."

And he slipped off the suit of yellow feathers as quickly as possible.

A third suit was of pure white feathers. Turkey Buzzard thought it looked very beautiful. It was a perfect fit.

"But it will get dirty too soon," he said. "I will not choose this."

And this, too, was laid aside.

There were not enough feathers in the fourth suit. Turkey Buzzard shivered with cold. It was not warm enough. He would not have it.

There were too many feathers, and too many pieces, in the fifth suit. It took too much time to put it on. Turkey Buzzard did not want that.

So he went from one suit to another, trying on and taking off. Always he had some new fault to find. Something was wrong with each one. Nothing quite pleased him. No suit was just right.

At last there was but one suit left. It was not pretty. It was a plain, dull color,-and very short of feathers at the neck and head. Turkey Buzzard put it on. He did not like it. It did not fit him well: it was cut too low in the neck. Turkey Buzzard thought it was the homeliest suit of all. But it was the last suit, so he kept it on.

Then Gah gah go wah, the Turkey Buzzard, gathered up the suits and flew back to the bird lodge. He still wore the plain, dull-colored suit.

The birds again called a council. Each was told to select a suit from those that Gah gah go wah had brought, and put it on. This they did.

Then the birds in their beautiful feathered suits began to walk and fly about the Turkey Buzzard, and to make fun of his plain, dull dress.

But Gah gah go wah held his head high. He walked proudly about among the birds. He looked with scorn on their beautiful suits. After a time he spoke.

He said, "Gah gah go wah, the Turkey Buzzard, does not want your suits. He had the pick of them all. He likes his own suit best."

Adapted from Erminie Smith's Myths of the Iroquois. 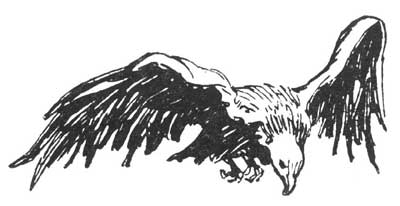 If you use Facebook or Google+ & enjoyed How The Turkey Buzzard Got His Suit, please tell your friends and let us know to find more like it for you!