When they went into a town, they divided the streets between them. Each man went up and down the streets he had chosen, calling, "Tinware for sale. Brass for sale." People came out to their door-steps, and bought, or traded, with them.

In one house there lived a poor old woman and her granddaughter. The family had once been rich, but now the only thing they had left of all their riches was a golden bowl. The grandmother did not know it was a golden bowl, but she had kept this because her husband used to eat out of it in the old days. It stood on a shelf among the other pots and pans, and was not often used.

The greedy merchant passed this house, calling, "Buy my water-jars! Buy my pans!" The granddaughter said: "Oh, Grandmother, do buy something for me!"

"My dear," said the old woman, "we are too poor to buy anything. I have not anything to trade, even."

"Grandmother, see what the merchant will give for the old bowl. We do not use that, and perhaps he will take it and give us something we want for it."

The old woman called the merchant and showed him the bowl, saying, "Will you take this, sir, and give the little girl here something for it?" 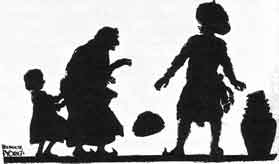 The greedy man took the bowl and scratched its side with a needle. Thus he found that it was a golden bowl. He hoped he could get it for nothing, so he said: "What is this worth? Not even a halfpenny." He threw the bowl on the ground, and went away.

By and by the other merchant passed the house. For it was agreed that either merchant might go through any street which the other had left. He called: "Buy my water-jars! Buy my tinware! Buy my brass!"

The little girl heard him, and begged her grandmother to see what he would give for the bowl.

"My child," said the grandmother, "the merchant who was just here threw the bowl on the ground and went away. I have nothing else to offer in trade."

"But, Grandmother," said the girl, "that was a cross man. This one looks pleasant. Ask him. Perhaps he 'll give some little tin dish."

"Call him, then, and show it to him," said the old woman.

As soon as the merchant took the bowl in his hands, he knew it was of gold. He said: "All that I have here is not worth so much as this bowl. It is a golden bowl. I am not rich enough to buy it."

"But, sir, a merchant who passed here a few moments ago, threw it on the ground, saying it was not worth a halfpenny, and he went away," said the grandmother. "It was worth nothing to him. If you value it, take it, giving the little girl some dish she likes for it." 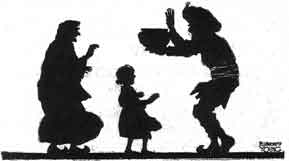 But the merchant would not have it so. He gave the woman all the money he had, and all his wares. "Give me but eight pennies," he said.

So he took the pennies, and left. Going quickly to the river, he paid the boatman the eight pennies to take him across the river.

Soon the greedy merchant went back to the house where he had seen the golden bowl, and said: "Bring that bowl to me, and I will give you something for it."

"No," said the grandmother. "You said the bowl was worthless, but another merchant has paid a great price for it, and taken it away."

Then the greedy merchant was angry, crying out, "Through this other man I have lost a small fortune. That bowl was of gold."

He ran down to the riverside, and, seeing the other merchant in the boat out in the river, he called: "Hallo, Boatman! Stop your boat!"

But the man in the boat said: "Don't stop!" So he reached the city on the other side of the river, and lived well for a time on the money the bowl brought him.

If you use Facebook or Google+ & enjoyed The Merchant Of Seri, please tell your friends and let us know to find more like it for you!