At one time a dishonest king had a man called the Valuer in his court. The Valuer set the price which ought to be paid for horses and elephants and the other animals. He also set the price on jewelry and gold, and things of that kind.

This man was honest and just, and set the proper price to be paid to the owners of the goods.

The king was not pleased with this Valuer, because he was honest. "If I had another sort of a man as Valuer, I might gain more riches," he thought.

One day the king saw a stupid, miserly peasant come into the palace yard. The king sent for the fellow and asked him if he would like to be the Valuer. The peasant said he would like the position. So the king had him made Valuer. He sent the honest Valuer away from the palace. 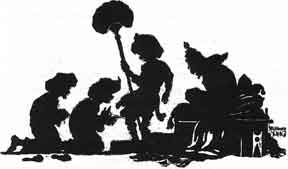 Then the peasant began to set the prices on horses and elephants, upon gold and jewels. He did not know their value, so he would say anything he chose. As the king had made him Valuer, the people had to sell their goods for the price he set.

The horse-dealer went then to see the honest man who had been the Valuer, and told him what had happened.

"What shall I do?" asked the horse-dealer.

"I think you can give a present to the Valuer which will make him do and say what you want him to do and say," said the man. "Go to him and give him a fine present, then say to him: 'You said the horses are worth a measure of rice, but now tell what a measure of rice is worth! Can you value that standing in your place by the king?' If he says he can, go with him to the king, and I will be there, too."

The horse-dealer thought this was a good idea. So he took a fine present to the Valuer, and said what the other man had told him to say.

The Valuer took the present, and said: "Yes, I can go before the king with you and tell what a measure of rice is worth. I can value that now."

"Well, let us go at once," said the horse-dealer. So they went before the king and his ministers in the palace.

The king, not knowing what had happened, asked: "How now, Valuer, what are five hundred horses worth?" 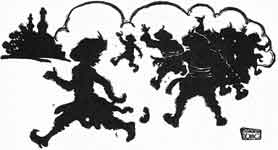 "The measure of rice is worth your whole city," replied the foolish fellow.

The ministers clapped their hands, laughing, and saying, "What a foolish Valuer! How can such a man hold that office? We used to think this great city was beyond price, but this man says it is worth only a measure of rice."

Then the king was ashamed, and drove out the foolish fellow.

"I tried to please the king by setting a low price on the horses, and now see what has happened to me!" said the Valuer, as he ran away from the laughing crowd.

If you use Facebook or Google+ & enjoyed The Measure Of Rice, please tell your friends and let us know to find more like it for you!