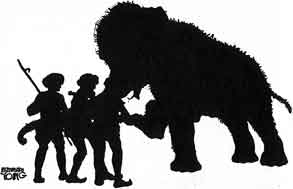 Once upon a time a number of carpenters lived on a river bank near a large forest. Every day the carpenters went in boats to the forest to cut down the trees and make them into lumber.

One day while they were at work an Elephant came limping on three feet to them. He held up one foot and the carpenters saw that it was swollen and sore. Then the Elephant lay down and the men saw that there was a great splinter in the sore foot. They pulled it out and washed the sore carefully so that in a short time it would be well again.

Thankful for the cure, the Elephant thought: "These carpenters have done so much for me, I must be useful to them." 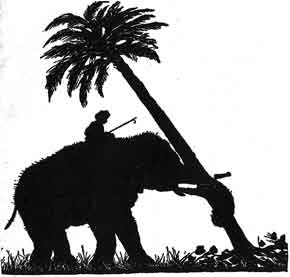 So after that the Elephant used to pull up trees for the carpenters. Sometimes when the trees were chopped down he would roll the logs down to the river. Other times he brought their tools for them. And the carpenters used to feed him well morning, noon and night.

Now this Elephant had a son who was white all over--a beautiful, strong young one. Said the old Elephant to himself, "I will take my son to the place in the forest where I go to work each day so that he may learn to help the carpenters, for I am no longer young and strong."

So the old Elephant told his son how the carpenters had taken good care of him when he was badly hurt and took him to them. The white Elephant did as his father told him to do and helped the carpenters and they fed him well.

When the work was done at night the young Elephant went to play in the river. The carpenters' children played with him, in the water and on the bank. He liked to pick them up in his trunk and set them on the high branches of the trees and then let them climb down on his back. 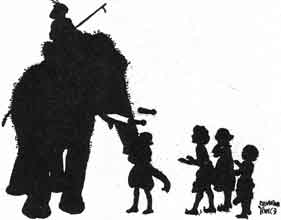 The king was proud of his new Elephant and took the best care of him as long as he lived.

If you use Facebook or Google+ & enjoyed The King's White Elephant, please tell your friends and let us know to find more like it for you!