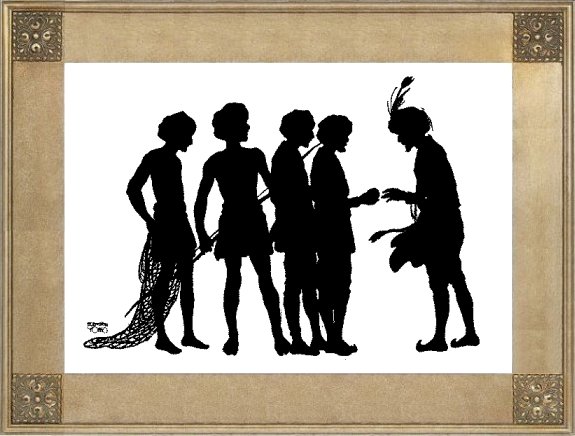 A mango-tree grew on the bank of a great river. The fruit fell from some of the branches of this tree into the river, and from other branches it fell on the ground.

Every night a troop of Monkeys gathered the fruit that lay on the ground and climbed up into the tree to get the mangoes, which were like large, juicy peaches.

One day the king of the country stood on the bank of this same river, but many miles below where the mango-tree grew. The king was watching the fishermen with their nets.

As they drew in their nets, the fishermen found not only fishes but a strange fruit. They went to the king with the strange fruit. "What is this?" asked the king. "We do not know, O King," they said.

"Call the foresters," said the king, "They will know what it is."

So they called the foresters and they said that it was a mango.

The foresters said it was very good. So the king cut the mango and giving some to the princes, he ate some of it himself. He liked it very much, and they all liked it.

Then the king said to the foresters, "Where does the mango-tree grow?"

The foresters told him that it grew on the river bank many miles farther up the river.

"Let us go and see the tree and get some mangoes," said the king.

So he had many rafts joined together, and they went up the river until they came to the place where the mango-tree grew.

The foresters said, "O King, this is the mango-tree."

"We will land here," said the king, and they did so. The king and all the men with him gathered the mangoes that lay on the ground under the tree. They all liked them so well that the king said, "Let us stay here to-night, and gather more fruit in the morning." So they had their supper under the trees, and then lay down to sleep.

When all was quiet, the Chief of the Monkeys came with his troop. All the mangoes on the ground had been eaten, so the monkeys jumped from branch to branch, picking and eating mangoes, and chattering to one another. They made so much noise that they woke up the king. He called his archers saying: "Stand under the mango-tree and shoot the Monkeys as they come down to the ground to get away. Then in the morning we shall have Monkey's flesh as well as mangoes to eat."

The Chief said: "Do not fear; I will save you. Stay where you are until I call you."

The Monkeys were comforted, for he had always helped them whenever they had needed help.

Then the Chief of the Monkeys ran out on the branch of the mango-tree that hung out over the river. The long branches of the tree across the river did not quite meet the branch he stood on. The Chief said to himself: "If the Monkeys try to jump across from this tree to that, some of them will fall into the water and drown. I must save them, but how am I to do it? I know what I shall do. I shall make a bridge of my back."

So the Chief reached across and took hold of the longest branch of the tree across the river. He called, "Come, Monkeys; run out on this branch, step on my back, and then run along the branch of the other tree."

The king saw all that was done by the Chief and his troop. "That big Monkey," said the king to the archers, "saved the whole troop. I will see to it that he is taken care of the rest of his life."

And the king kept his promise.

If you use Facebook or Google+ & enjoyed How The Monkey Saved His Troop, please tell your friends and let us know to find more like it for you!