Once upon a time a king had an Elephant named Girly-face. The Elephant was called Girly-face because he was so gentle and good and looked so kind. "Girly-face never hurts anybody," the keeper of the Elephants often said. 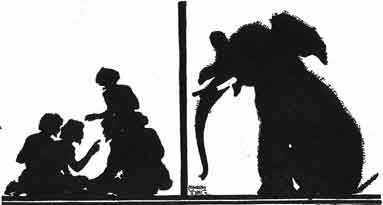 Now one night some robbers came into the courtyard and sat on the ground just outside the stall where Girly-face slept. The talk of the robbers awoke Girly-face.

"This is the way to break into a house," they said. "Once inside the house kill any one who wakens. A robber must not be afraid to kill. A robber must be cruel and have no pity. He must never be good, even for a moment."

Girly-face said to himself, "Those men are teaching me how I should act. I will be cruel. I will show no pity. I will not be good--not even for a moment."

So the next morning when the keeper came to feed Girly-face he picked him up in his trunk and threw the poor keeper to the ground, killing him.

Another keeper ran to see what the trouble was, and Girly-face killed him, too.

For days and days Girly-face was so ugly that no one dared go near. The food was left for him, but no man would go near him.

By and by the king heard of this and sent one of his wise men to find out what ailed Girly-face.

The wise man had known Girly-face a long time. He looked the Elephant over carefully and could find nothing that seemed to be the matter.

"Yes," one of the keepers said, "a band of robbers were caught here a few weeks ago. They had met in the yard to talk over their plans. They were talking together near the stall where Girly-face sleeps." 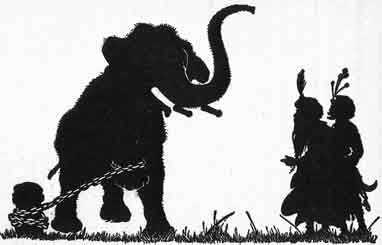 So the wise man went back to the king. Said he, "I think Girly-face has been listening to bad talk. If you will send some good men to talk where Girly-face can hear them I think he will be a good Elephant once more."

So that night the king sent a company of the best men to be found to sit and talk near the stall where Girly-face lived. They said to one another, "It is wrong to hurt any one. It is wrong to kill. Every one should be gentle and good."

"Now those men are teaching me," thought Girly-face. "I must be gentle and good. I must hurt no one. I must not kill any one." And from that time on Girly-face was tame and as good as ever an Elephant could be.

If you use Facebook or Google+ & enjoyed The Elephant Girly-Face, please tell your friends and let us know to find more like it for you!