One day the king was hunting in the forest with his retinue and they lost their way, so that they were obliged to take refuge in a hermit's hut. It was the hermitage of Saint Corentin.

King Grallon had often heard of this holy man and was glad to have been led to his abode. But the servants of the king looked askance at the saint's poor hut and said to themselves that they would get only prayers for supper. The saint guessed their thoughts, for he understood much of what passed in the minds of men.

So he asked the king if he and his servants would accept light food and drink and, as they had eaten nothing since cockcrow, the king gladly accepted.

Saint Corentin called the king's cupbearer and his cook and told them to prepare a meal. He led them to a spring nearby where he filled the cupbearer's golden jar with water. A small fish was swimming in the water, and this the saintly hermit took and, cutting off a bit, gave it to the cook. Then he told the cook and bearer to hasten and lay the cloth for the king and all his retinue.

The cupbearer and the cook burst out laughing and asked Saint Corentin if he took the courtiers of the king for beggars since he dared to offer them naught but bones of fish and frogs' wine. But the saint answered them that heaven would provide. Grumblingly the two laid the cloth when, to their vast surprise, Saint Corentin's promise was fulfilled. The water in the golden jar changed into wine as sweet as honey and as warm as fire, and the piece of fish became so multiplied that it would have satisfied twice as many guests. as the king had in all his retinue.

The cupbearer and the cook related to the king this miracle, and showed him also another marvel: the fish that the saint had cut in two was swimming in the brook as whole as if the saint's knife had never touched it! When the king saw this he was seized with wonderment and said to the hermit:

"Man of God, your place is not here, for your Master and mine has forbidden us to hide our light under a bushel. You must leave this hermitage and come to my city of Quimper where you will be consecrated bishop. My own palace shall be your dwelling place and the town itself will I give into your keeping."

And so it was that the king gave up Quimper unto the holy hermit and went to live in the city of Ker-Is.

Now King Grallon had an only daughter, the Princess Ahez. But she was not upright like her father. Indeed her conduct was so evil that in order to be out of her father's sight she had left his court and had gone to the city of Ker-Is where the king now followed her.

Ker-Is was so magnificent and beautiful that when men of the olden times wished to praise the French folks' mighty town--now Paris--they could think of words none other than Par-Is, that is to say the equal of Is.

Stately Is was built below the level of the sea and was protected by dykes, the doors of which were opened at certain hours to allow the water to pass in and out. The wicked princess always carried the silver keys of these doors hanging around her neck, and that is why people called her the Princess Ahez which means the Key-bearer.

As she was a powerful magician she had decorated the town with things too difficult for man's hands to make. All the elves around had come thither at her command to build the dykes and forge the gates. They had covered the palace with metal that gleamed with golden light and had surrounded the gardens with balustrades that shone like polished steel. It was the elves, too, that looked after the princess' stables. The stalls were resplendent with red, white or black marble according to the color of the horses.

These obedient elves were also keepers of the harbor. There they fed the sea dragons. For the Princess Ahez had the sea beasts in her power also. Indeed, she had given these monsters to the inhabitants of Ker-Is. They rode the dragons beyond the seas and carried back rare stuffs and treasures, and with the monsters' might they drove away the ships of enemies. Thus the townsfolk had become so rich that they measured their grain with cups of gold.

But alas, wealth had made them wicked and hardhearted. The poor and the helpless were driven from the town. The church was so forsaken that the beadle had lost the key; nettles were growing on the threshold and swallows nested in the joints of the door. The townsfolk spent their days and nights in taverns, theatres, and ballrooms, knowing no business more absorbing than the losing of their souls.

In wickedness Ahez was the moving spirit. Day and night there was feasting in her palace. Knights and princes came from far countries drawn by the fame of the princess' beauty. And many a handsome man did the wicked Ahez slay. She gave each one, when he arrived at the palace, a magic mask which made him invisible, but when he left her the enchanted mask would tighten and strangle him. A black man would appear and, taking the body would fling it across his horse like a sack of corn. He would then ride to a high precipice and throw the corpse into the sea. And this is true, for even now you can hear their souls moaning in the abyss.

Saint Corentin, who knew all that was happening at Ker-Is, had warned King Grallon that punishment would follow his daughter's deeds. But the king was powerless. He lived alone, forsaken by everyone save a few faithful servants, like a grandfather who has handed over his possessions to his children.

As for the Princess Ahez she paid no attention to the Saint's predictions.

Now one evening when there were riotous festivities in the palace, a powerful prince was announced. He had come from the ends of the earth to see Ahez. He towered head and shoulders above all the people and his beard was so immense that his eyes were all but hidden. They shone like stars upon a sea of blackness.

He addressed compliments to the princess in verse. No bard from all that countryside could match his rhyme nor wit. The princess and her guests were astonished. Yet what amazed and pleased them more was to discover how much cleverer in wickedness this bearded stranger was than they themselves. He knew not only all the wickedness that men have practised since the beginning of the world, but he seemed to know all that they would invent till the end of time. The princess and her courtiers had to acknowledge their master, and they resolved to take lessons from the bearded stranger. They did not know that he was Old Nick alarmed for his own power by the increasing wickedness of the princess.

He first offered to teach them a new dance. It was none other than the dance of the seven deadly sins, and for this he called in his piper, a dwarf dressed in goatskin. Hardly had the dwarf begun to pipe than the princess and her friends were seized with a frenzy of delight and began to whirl in a mad dance. The bearded stranger took advantage of this confusion to snatch the silver keys, unnoticed, from the princess' neck and vanish from the ballroom.

While this was happening the king was sitting alone in the seclusion of his own domain. He was in a vaulted and shadowed room seated near the hearth where a dull fire smouldered. His heart was full of anguish and he wept. Suddenly the door opened and Saint Corentin appeared. A halo glowed about his head and in his hand was a bishop's staff. He was walking in a cloud of incense.

"Rise up, great king," said he to Grallon. "Take anything precious you still possess and flee. For this accursed city has given itself into the power of the Demon."

King Grallon, terrified, rose up at once. Seizing his most precious treasures he hurriedly left his castle, mounted his black charger and set forth for the city's gates. The saint went with him, gliding through the air. 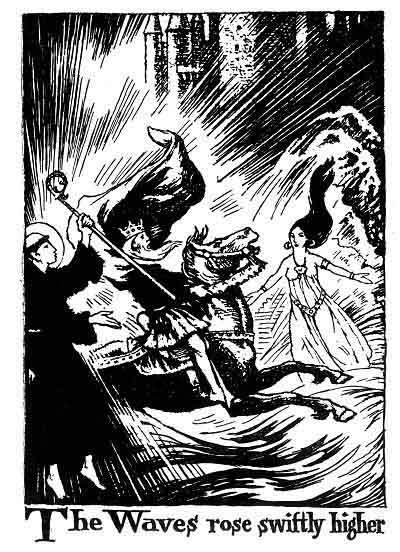 As they passed before the massive dyke they heard a rumbling of water. They saw the bearded stranger, who had now resumed his demon shape, busily opening the locks with the silver keys he had snatched from the Princess Ahez. The sea was already rushing in, and the towering waves were dashing, even now, over the white roofs of the city. The dragons chained in the harbor bellowed with terror, for animals know when death is drawing near. The king longed to cry a warning to his people but Saint Corentin urged him onward in his flight. His horse passed swiftly through the streets and squares pursued by the angry sea. Always were the steed's hind legs in water no matter how furiously he leaped.

As they passed the entrance to the Princess Ahez' palace she appeared on the steps, her hair floating out behind her. She rushed after her father and seized his charger's rein. The good horse stopped so that the princess might mount behind the king, up to whose knees the flood had already risen.

"Throw off the load of sin you have behind you!" called back the saint.

The king, who despite his daughter's wickedness had for her a father's love, knew not what to do. Meanwhile the waves rose swiftly higher. But Corentin came quickly and touched the princess' shoulder with his bishop's staff. Immediately she rolled off the horse into the sea, and was sucked down into an abyss of waters called ever after the Pit of Ahez.

When the king's horse was delivered from his burden he leaped forward and with one bound reached the rock of Carrec. Here, even to this day, upon the granite may be seen the mark of the black steed's hoofs. Thus was the king's life saved.

King Grallon fell upon his knees and thanked God for his deliverance. Then, standing, he looked toward Ker-Is, the once beautiful city. There, where had been stately houses and glittering palaces was now a bay upon whose waters were reflected the stars. Then the king turned and beheld on the horizon, standing on the last remnant of the submerged dykes, the bearded stranger triumphantly shaking the silver keys.

If you use Facebook or Google+ & enjoyed Princess Ahez And The Lost City, please tell your friends and let us know to find more like it for you!