Two king's sons once started to seek adventures, and fell into a wild, reckless way of living, and gave up all thoughts of going home again. Their third and youngest brother, who was called Witling, and had remained behind, started off to seek them; and when at last he found them, they jeered at his simplicity in thinking that he could make his way in the world, while they who were so much cleverer were unsuccessful. But they all three went on together until they came to an ant-hill, which the two eldest brothers wished to stir up, that they might see the little ants hurry about in their fright and carrying off their eggs, but Witling said,

"Leave the little creatures alone, I will not suffer them to be disturbed."

And they went on farther until they came to a lake, where a number of ducks were swimming about. The two eldest brothers wanted to catch a couple and cook them, but Witling would not allow it, and said, "Leave the creatures alone, I will not suffer them to be killed."

And then they came to a bee's-nest in a tree, and there was so much honey in it that it overflowed and ran down the trunk. The two eldest brothers then wanted to make a fire beneath the tree, that the bees might be stifled by the smoke, and then they could get at the honey. But Witling prevented them, saying,

"Leave the little creatures alone, I will not suffer them to be stifled."

At last the three brothers came to a castle where there were in the stables many horses standing, all of stone, and the brothers went through all the rooms until they came to a door at the end secured with three locks, and in the middle of the door a small opening through which they could look into the room. And they saw a little grey-haired man sitting at a table. They called out to him once, twice, and he did not hear, but at the third time he got up, undid the locks, and came out. Without speaking a word he led them to a table loaded with all sorts of good things, and when they had eaten and drunk he showed to each his bed-chamber. The next morning the little grey man came to the eldest brother, and beckoning him, brought him to a table of stone, on which were written three things directing by what means the castle could be delivered from its enchantment. The first thing was, that in the wood under the moss lay the pearls belonging to the princess - a thousand in number - and they were to be sought for and collected, and if he who should undertake the task had not finished it by sunset, - if but one pearl were missing, - he must be turned to stone. So the eldest brother went out, and searched all day, but at the end of it he had only found one hundred; just as was said on the table of stone came to pass and he was turned into stone. The second brother undertook the adventure next day, but it fared with him no better than with the first; he found two hundred pearls, and was turned into stone.

And so at last it was Witling's turn, and he began to search in the moss; but it was a very tedious business to find the pearls, and he grew so out of heart that he sat down on a stone and began to weep. As he was sitting thus, up came the ant-king with five thousand ants, whose lives had been saved through Witling's pity, and it was not very long before the little insects had collected all the pearls and put them in a heap.

Now the second thing ordered by the table of stone was to get the key of the princess's sleeping-chamber out of the lake.

And when Witling came to the lake, the ducks whose lives he had saved came swimming, and dived below, and brought up the key from the bottom. The third thing that had to be done was the most difficult, and that was to choose out the youngest and loveliest of the three princesses, as they lay sleeping. All bore a perfect resemblance each to the other, and only differed in this, that before they went to sleep each one had eaten a different sweetmeat, - the eldest a piece of sugar, the second a little syrup, and the third a spoonful of honey. Now the Queen-bee of those bees that Witling had protected from the fire came at this moment, and trying the lips of all three, settled on those of the one that had eaten honey, and so it was that the king's son knew which to choose. Then the spell was broken; every one awoke from stony sleep, and took their right form again.

And Witling married the youngest and loveliest princess, and became king after her father's death. But his two brothers had to put up with the two other sisters. 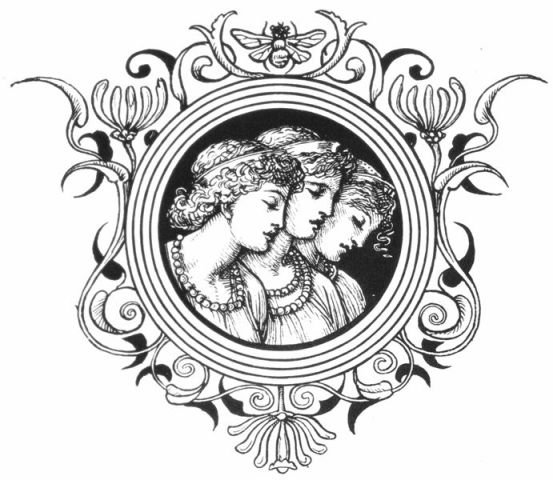 Illustration For The Queen Bee By Walter Crane

If you use Facebook or Google+ & enjoyed The Queen Bee, please tell your friends and let us know to find more like it for you!