There was once a peasant who owned a faithful dog called Sultan, now grown so old that he had lost all his teeth, and could lay hold of nothing. One day the man was standing at the door of his house with his wife, and he said,

"I shall kill old Sultan to-morrow; he is of no good any longer."

His wife felt sorry for the poor dog, and answered, "He has served us for so many years, and has kept with us so faithfully, he deserves food and shelter in his old age."

"Dear me, you do not seem to understand the matter," said the husband; "he has never a tooth, and no thief would mind him in the least, so I do not see why he should not be made away with. If he has served us well, we have given him plenty of good food."

The poor dog, who was lying stretched out in the sun not far off, heard all they said, and was very sad to think that the next day would be his last. He bethought him of his great friend the wolf, and slipped out in the evening to the wood to see him, and related to him the fate that was awaiting him.

"Listen to me, old fellow," said the wolf; "be of good courage, I will help you in your need. I have thought of a way. Early to-morrow morning your master is going hay-making with his wife, and they will take their child with them, so that no one will be left at home. They will be sure to lay the child in the shade behind the hedge while they are at work; you must lie by its side, just as if you were watching it. Then I will come out of the wood and steal away the child; you must rush after me, as if to save it from me. Then I must let it fall, and you must bring it back again to its parents, who will think that you have saved it, and will be much too grateful to do you any harm; on the contrary, you will be received into full favour, and they will never let you want for anything again."

The dog was pleased with the plan, which was carried out accordingly. When the father saw the wolf running away with his child he cried out, and when old Sultan brought it back again, he was much pleased with him, and patted him, saying,

"Not a hair of him shall be touched; he shall have food and shelter as long as he lives." And he said to his wife,

"Go home directly and make some good stew for old Sultan, something that does not need biting; and get the pillow from my bed for him to lie on."

From that time old Sultan was made so comfortable that he had nothing left to wish for. Before long the wolf paid him a visit, to congratulate him that all had gone so well.

"But, old fellow," said he, "you must wink at my making off by chance with a fat sheep of your master's; perhaps one will escape some fine day."

"Don't reckon on that," answered the dog; "I cannot consent to it; I must remain true to my master."

But the wolf, not supposing it was said in earnest, came sneaking in the night to carry off the sheep. But the master, who had been warned by the faithful Sultan of the wolf's intention, was waiting for him, and gave him a fine hiding with the threshing-flail. So the wolf had to make his escape, calling out to the dog,

"You shall pay for this, you traitor!"

The next morning the wolf sent the wild boar to call out the dog; and to appoint a meeting in the wood to receive satisfaction from him. Old Sultan could find no second but a cat with three legs; and as they set off together, the poor thing went limping along, holding her tail up in the air. The wolf and his second were already on the spot; when they saw their antagonists coming, and caught sight of the elevated tail of the cat, they thought it was a sabre they were bringing with them. And as the poor thing came limping on three legs, they supposed it was lifting a big stone to throw at them. This frightened them very much; the wild boar crept among the leaves, and the wolf clambered up into a tree. And when the dog and cat came up, they were surprised not to see any one there. However, the wild boar was not perfectly hidden in the leaves, and the tips of his ears peeped out. And when the cat caught sight of one, she thought it was a mouse, and sprang upon it, seizing it with her teeth. Out leaped the wild boar with a dreadful cry, and ran away shouting,

"There is the culprit in the tree!"

And the dog and the cat looking up caught sight of the wolf, who came down, quite ashamed of his timidity, and made peace with the dog once more. 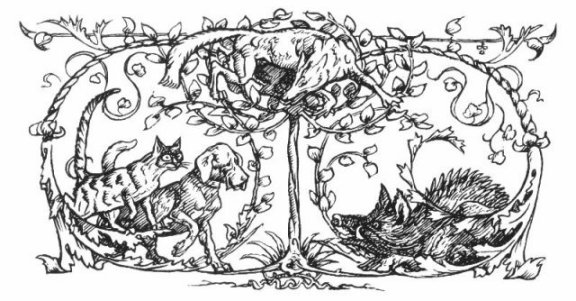 Illustration For The Old Sultan By Walter Crane

If you use Facebook or Google+ & enjoyed Old Sultan, please tell your friends and let us know to find more like it for you!