In the rude days of King Richard and King John there were many great woods in England. The most famous of these was Sherwood forest, where the king often went to hunt deer. In this forest there lived a band of daring men called outlaws.

They had done something that was against the laws of the land, and had been forced to hide themselves in the woods to save their lives. There they spent their time in roaming about among the trees, in hunting the king's deer, and in robbing rich travelers that came that way.

There were nearly a hundred of these outlaws, and their leader was a bold fellow called Robin Hood. They were dressed in suits of green, and armed with bows and arrows; and sometimes they carried long wooden lances and broadswords, which they knew how to handle well. Whenever they had taken anything, it was brought and laid at the feet of Robin Hood, whom they called their king. He then divided it fairly among them, giving to each man his just share.

Robin never allowed his men to harm anybody but the rich men who lived in great houses and did no work. He was always kind to the poor, and he often sent help to them; and for that reason the common people looked upon him as their friend.

Long after he was dead, men liked to talk about his deeds. Some praised him, and some blamed him. He was, indeed, a rude, lawless fellow; but at that time, people did not think of right and wrong as they do now.

A great many songs were made up about Robin Hood, and these songs were sung in the cottages and huts all over the land for hundreds of years afterward.

Here is a little story that is told in one of those songs:

Robin Hood was standing one day under a green tree by the roadside. While he was listening to the birds among the leaves, he saw a young man passing by. This young man was dressed in a fine suit of bright red cloth; and, as he tripped gayly along the road, he seemed to be as happy as the day.

"I will not trouble him," said Robin Hood, "for I think he is on his way to his wedding."

The next day Robin stood in the same place. He had not been there long when he saw the same young man coming down the road. But he did not seem to be so happy this time. He had left his scarlet coat at home, and at every step he sighed and groaned.

Then Robin Hood stepped out from under the tree, and said,

"I say, young man! Have you any money to spare for my merry men and me?"

"I have nothing at all," said the young man, "but five shillings and a ring."

"I have kept it these seven years," said the young man; "I have kept it to give to my bride on our wedding day. We were going to be married yesterday. But her father has promised her to a rich old man whom she never saw. And now my heart is broken."

"What is your name?" asked Robin.

"My name is Allin-a-Dale," said the young man.

"What will you give me, in gold or fee," said Robin, "if I will help you win your bride again in spite of the rich old man to whom she has been promised?" 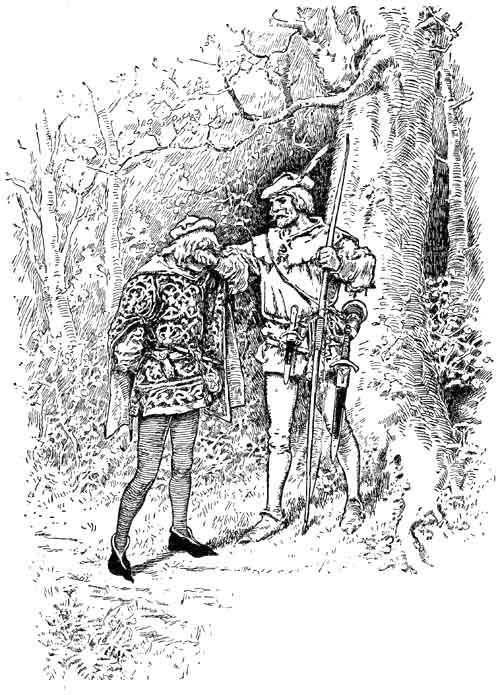 "I have no money," said Allin, "but I will promise to be your servant."

"How many miles is it to the place where the maiden lives?" asked Robin.

"It is not far," said Allin. "But she is to be married this very day, and the church is five miles away."

Then Robin made haste to dress himself as a harper; and in the afternoon he stood in the door of the church.

"Who are you?" said the bishop, "and what are you doing here?"

"I am a bold harper," said Robin, "the best in the north country."

"I am glad you have come," said the bishop kindly. "There is no music that I like so well as that of the harp. Come in, and play for us."

"I will go in," said Robin Hood; "but I will not give you any music until I see the bride and bridegroom."

Just then an old man came in. He was dressed in rich clothing, but was bent with age, and was feeble and gray. By his side walked a fair young girl. Her cheeks were very pale, and her eyes were full of tears.

"This is no match," said Robin. "Let the bride choose for herself."

Then he put his horn to his lips, and blew three times. The very next minute, four and twenty men, all dressed in green, and carrying long bows in their hands, came running across the fields. And as they marched into the church, all in a row, the foremost among them was Allin-a-Dale.

"Now whom do you choose?" said Robin to the maiden.

"I choose Allin-a-Dale," she said, blushing.

"And Allin-a-Dale you shall have," said Robin; "and he that takes you from Allin-a-Dale shall find that he has Robin Hood to deal with."

And so the fair maiden and Allin-a-Dale were married then and there, and the rich old man went home in a great rage.

And thus having ended this merry wedding,
The bride looked like a queen:
And so they returned to the merry green wood,
Amongst the leaves so green.

If you use Facebook or Google+ & enjoyed A Story Of Robin Hood, please tell your friends and let us know to find more like it for you!