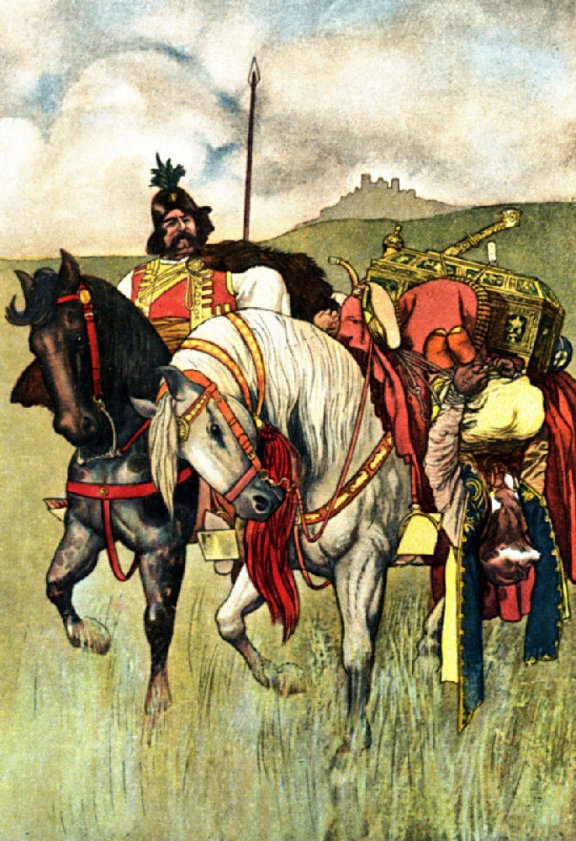 Kralewitz Marko was the son of a Servian king who lived many, many years ago. He was very fond of hunting, and one day he rode forth on his horse Saria to the mountain Sargau. Being tired, he dismounted, tied his horse to a tree, sat down in its shade and fell asleep.

And as he slept it happened that Arbanes Neda with his seven brothers rode by. They all dismounted, lifted Kralewitz, bound him to his horse, and rode away with him to Jedrena, where they presented him to the vizier.

Highly pleased over the gift, the vizier took the king's son and threw him into prison. Two long years Kralewitz lay there, longing for liberty and home. Then he learned that in a few days he was to be executed.

Immediately he wrote a letter to his friend, Milos Obilis, asking for help. This important message he entrusted to his only companion, a white falcon. Tying the letter under the bird's wing he set it free.

The falcon easily found its way, alighted on Milos' window, and was admitted. Scarcely had Milos read the letter, when he and two of his friends were ready to set out for Jedrena. They reached there the day before the execution.

In the morning the gate of the city was opened and Marko was led out. Milos and his companions accompanied the mournful procession to an open field in which the execution was to take place. Two Arabs stood up with gleaming swords prepared to cut off Marko's head.

"Hold on, brothers," cried Milos. "I will give you a sharper sword with which to cut off the malicious head of the noble Piam. See, with this sword did the good-for-nothing treacherously slay my father. Cursed be his hand!"

With these words he rushed to Marko's side; then with one swift stroke he cut off the head of one Arab, and with another the head of the other.

With still another stroke he severed the chains that bound Marko, and Marko, seizing a sword, swung himself into his saddle, and with his friends began to attack the horde of Turks. Frightened, the Turks fled before them, and Marko and his companions returned to their own country.

Marko waited for and soon found the opportunity of showing his gratitude to his friend, for Milos and two of his brothers were thrown into prison in Varadin. Milos wrote with his own blood a letter to Marko, asking for help.

Then the king's son sprang to his horse Saria and rode to Varadin. Outside of the city he dismounted, stuck his spear in the earth, tied Saria and began drinking the black wine which he had brought with him. He poured it into huge beakers, half of which he drank himself, and half of which he gave to Saria.

At the same time a beautiful maiden, the daughter-in-law of the general, passed by. When she saw the king's son she was frightened and ran and told her father-in-law.

Then the general sent out his son Velimir with three hundred men to take Marko prisoner. The knights encircled Kralewitz Marko, but he continued drinking his wine and paid no attention to them. But Saria noticed them, and drawing near her master began beating the ground with her hoofs.

At this Marko looked up and saw himself surrounded. He emptied his beaker, threw it to the ground, and sprang to his horse.

Like a falcon among doves Marko charged against the enemy. He cut off the heads of some and drove the rest before him into the Danube. Velimir tried to flee, but Marko threw him from his horse, tied his hands and feet and bound him to Saria. Then again he began to drink his wine.

All this the maiden watched and reported to her father. He gathered together three thousand knights and rode forth against the stranger. They surrounded Marko, but he was undismayed. Bravely he charged against them, his sword in his right hand, his spear in his left, and the reins held between his teeth.

Every knight he touched with either sword or spear fell instantly to the ground, and when Vuca, the general, wholly dismayed, tried to escape on his fiery Arabian horse, Marko followed him, threw him, bound him, and led him to the place where his son lay. Then he bound the two together, tossed them on the saddle of the Arabian horse and rode home. There he put them in prison.

Hearing this, the wife of the general wrote a letter to Marko, begging for mercy for her husband and son. Marko promised to release them on condition that she release Milos and his brothers. This she did, honoring them and making them rich presents.

"Now, for the love of Heaven," said she, "see that my husband and my son return to me."

"Never fear," answered Milos. "Give me the general's black horse; adorn him as the general adorned him; give me a golden chariot with twelve horses, such as the general rides in when he journeys to the emperor in Vienna; and give me the robe that the general wears on state occasions."

The wife provided all that he asked, and gave the prisoners for themselves a thousand ducats. Then they rode away.

Marko welcomed them, released the general and his son and provided them with a strong body-guard back to Varadin. Then Milos and his brothers divided the ducats among them, kissed the hand of the king's son, and rode away into their own country.

If you use Facebook or Google+ & enjoyed Kralewitz Marko Of Servia, please tell your friends and let us know to find more like it for you!