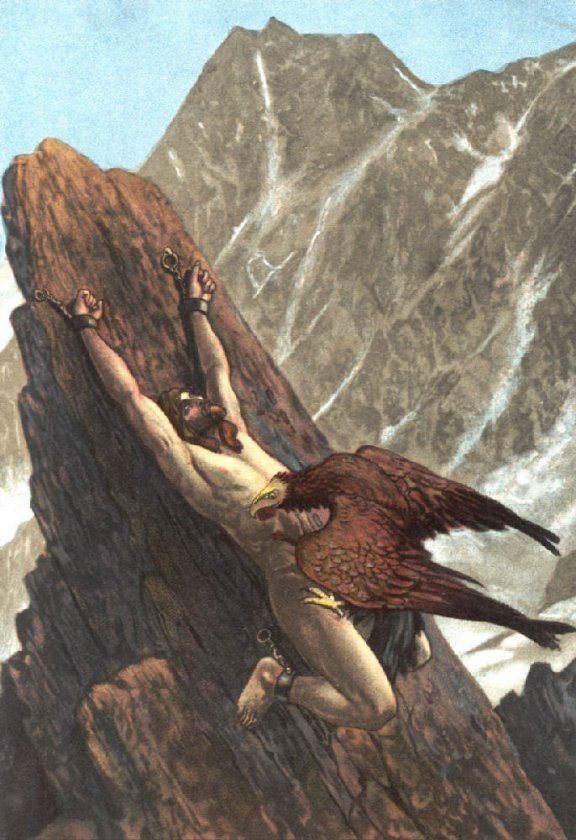 Many, many centuries ago there lived two brothers, Prometheus or Forethought, and Epimetheus or Afterthought. They were the sons of those Titans who had fought against Jupiter and been sent in chains to the great prison-house of the lower world, but for some reason had escaped punishment.

Prometheus, however, did not care for idle life among the gods on Mount Olympus. Instead he preferred to spend his time on the earth, helping men to find easier and better ways of living. For the children of earth were not happy as they had been in the golden days when Saturn ruled. Indeed, they were very poor and wretched and cold, without fire, without food, and with no shelter but miserable caves.

"With fire they could at least warm their bodies and cook their food," Prometheus thought, "and later they could make tools and build houses for themselves and enjoy some of the comforts of the gods."

So Prometheus went to Jupiter and asked that he might be permitted to carry fire to the earth. But Jupiter shook his head in wrath.

"Fire, indeed!" he exclaimed. "If men had fire they would soon be as strong and wise as we who dwell on Olympus. Never will I give my consent."

Prometheus made no reply, but he didn't give up his idea of helping men. "Some other way must be found," he thought.

Then, one day, as he was walking among some reeds he broke off one, and seeing that its hollow stalk was filled with a dry, soft pith, exclaimed:

"At last! In this I can carry fire, and the children of men shall have the great gift in spite of Jupiter."

Immediately, taking a long stalk in his hands, he set out for the dwelling of the sun in the far east. He reached there in the early morning, just as Apollo's chariot was about to begin its journey across the sky. Lighting his reed, he hurried back, carefully guarding the precious spark that was hidden in the hollow stalk.

Then he showed men how to build fires for themselves, and it was not long before they began to do all the wonderful things of which Prometheus had dreamed. They learned to cook and to domesticate animals and to till the fields and to mine precious metals and melt them into tools and weapons. And they came out of their dark and gloomy caves and built for themselves beautiful houses of wood and stone. And instead of being sad and unhappy they began to laugh and sing. "Behold, the Age of Gold has come again," they said.

But Jupiter was not so happy. He saw that men were gaining daily greater power, and their very prosperity made him angry.

"That young Titan!" he cried out, when he heard what Prometheus had done. "I will punish him."

But before punishing Prometheus he decided to vex the children of men. So he gave a lump of clay to his blacksmith, Vulcan, and told him to mold it in the form of a woman. When the work was done he carried it to Olympus.

Jupiter called the other gods together, bidding them give her each a gift. One bestowed upon her beauty, another, kindness, another, skill, another, curiosity, and so on. Jupiter himself gave her the gift of life, and they named her Pandora, which means "all-gifted."

Then Mercury, the messenger of the gods, took Pandora and led her down the mountain side to the place where Prometheus and his brother were living.

"Epimetheus, here is a beautiful woman that Jupiter has sent to be your wife," he said.

Epimetheus was delighted and soon loved Pandora very deeply, because of her beauty and her goodness.

Now Pandora had brought with her as a gift from Jupiter a golden casket. Athena had warned her never to open the box, but she could not help wondering and wondering what it contained. Perhaps it held beautiful jewels. Why should they go to waste?

At last she could not contain her curiosity any longer. She opened the box just a little to take a peep inside. Immediately there was a buzzing, whirring sound, and before she could snap down the lid ten thousand ugly little creatures had jumped out. They were diseases and troubles, and very glad they were to be free.

All over the earth they flew, entering into every household, and carrying sorrow and distress wherever they went.

How Jupiter must have laughed when he saw the result of Pandora's curiosity!

Soon after this the god decided that it was time to punish Prometheus. He called Strength and Force and bade them seize the Titan and carry him to the highest peak of the Caucasus Mountains. Then he sent Vulcan to bind him with iron chains, making arms and feet fast to the rocks. Vulcan was sorry for Prometheus, but dared not disobey.

So the friend of man lay, miserably bound, naked to the winds, while the storms beat about him and an eagle tore at his liver with its cruel talons. But Prometheus did not utter a groan in spite of all his sufferings. Year after year he lay in agony, and yet he would not complain, beg for mercy or repent of what he had done. Men were sorry for him, but could do nothing.

Then one day a beautiful white cow passed over the mountain, and stopped to look at Prometheus with sad eyes.

"I know you," Prometheus said. "You are Io, once a fair and happy maiden dwelling in Argos, doomed by Jupiter and his jealous queen to wander over the earth in this guise. Go southward and then west until you come to the great river Nile. There you shall again become a maiden, fairer than ever before, and shall marry the king of that country. And from your race shall spring the hero who will break my chains and set me free."

Centuries passed and then a great hero, Hercules, came to the Caucasus Mountains. He climbed the rugged peak, slew the fierce eagle, and with mighty blows broke the chains that bound the friend of man.

If you use Facebook or Google+ & enjoyed Prometheus, The Friend Of Man, please tell your friends and let us know to find more like it for you!