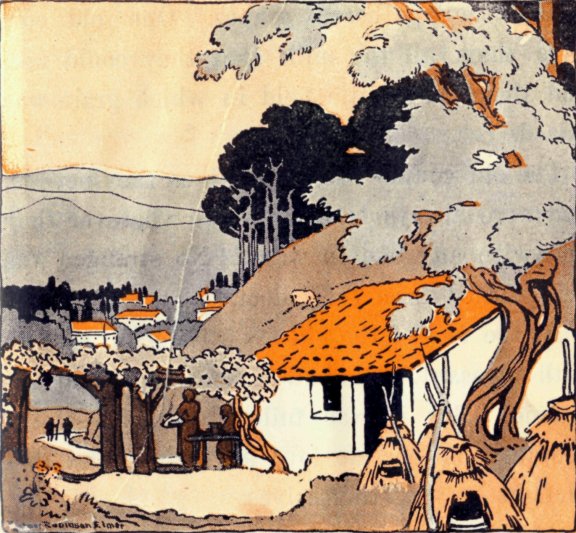 Long ago, on a high hill in Greece, Philemon and Baucis lived.

They were poor, but they were never unhappy. They had many hives of bees from which they got honey, and many vines from which they gathered grapes. One old cow gave them all the milk that they could use, and they had a little field in which grain was raised.

The old couple had as much as they needed, and were always ready to share whatever they had with any one in want. No stranger was ever turned from their door.

At the foot of the hill lay a beautiful village, with pleasant roads and rich pasture lands all around. But it was full of wicked, selfish, people, who had no love in their hearts and thought only of themselves.

At the time of this story, the people in the village were very busy. Zeus, who they believed ruled the world, had sent word that he was about to visit them. They were preparing a great feast and making everything beautiful for his coming.

One evening, just at dark, two beggars came into the valley. They stopped at every house and asked for food and a place to sleep; but the people were too busy or too tired to attend to their needs. They were thinking only of the coming of Zeus.

Footsore and weary, the two beggars at last climbed the hill to the hut of Philemon and Baucis. These good people had eaten very little, for they were saving their best food for Zeus.

When they saw the beggars, Philemon said, "Surely these men need food more than Zeus. They look almost starved."

"Indeed, they do!" said Baucis, and she ran quickly to prepare supper for the strangers.

She spread her best white cloth upon the table, and brought out bacon, herbs, honey, grapes, bread, and milk. She set these upon the table in all the best dishes she had and called the strangers in.

Then what do you suppose happened? The dishes that the strangers touched turned to gold. The pitcher was never empty, although they drank glass after glass of milk. The loaf of bread stayed always the same size, although the strangers cut slice after slice.

"These are strange travelers," whispered the old couple to each other. "They do wonderful things."

That night Philemon and Baucis slept upon the floor that the strangers might have their one bed. In the morning they went with the travelers to the foot of the hill to see them safely started on their way.

"Now, good people," said one of the strangers, "we thank you, and whatever you wish shall be yours."

As he said this, his face became like that of the sun. Then Philemon and Baucis knew that Zeus had spoken to them.

"Grant, O Zeus, that one of us may not outlive the other," they cried in one voice.

"Your wish is granted," said Zeus; "yes, and more. Return to your home and be happy."

Philemon and Baucis turned homeward, and, lo! their hut was changed to a beautiful castle.

The old people turned around to thank their guests, but they had disappeared.

In this castle Philemon and Baucis lived many years. They still did all they could for others, and were always so happy that they never thought of wishing anything for themselves.

As the years passed, the couple grew very old and feeble. One day Baucis said to Philemon, "I wish we might never die, but could always live together."

"Ah, that is my wish, too!" sighed old Philemon.

The next morning the marble palace was gone; Baucis and Philemon were gone; but there on the hilltop stood two beautiful trees, an oak and a linden.

No one knew what became of the good people. After many years, however, a traveler lying under the trees heard them whispering to each other.

There the trees stood through sun and rain, always ready to spread their leafy shade over every tired stranger who passed that way. 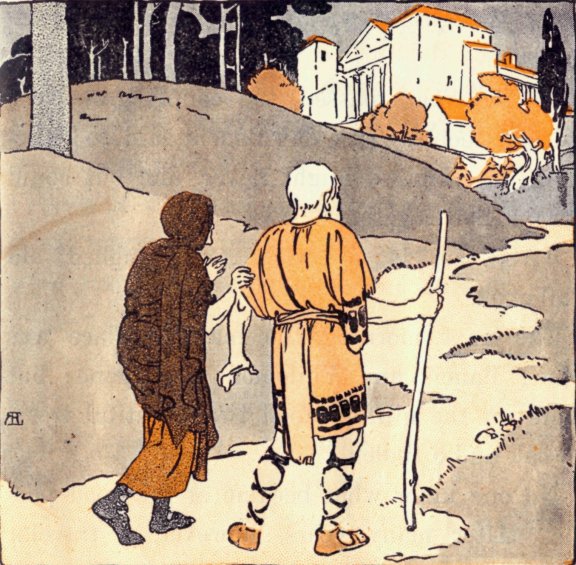 If you use Facebook or Google+ & enjoyed Philemon And Baucis, please tell your friends and let us know to find more like it for you!