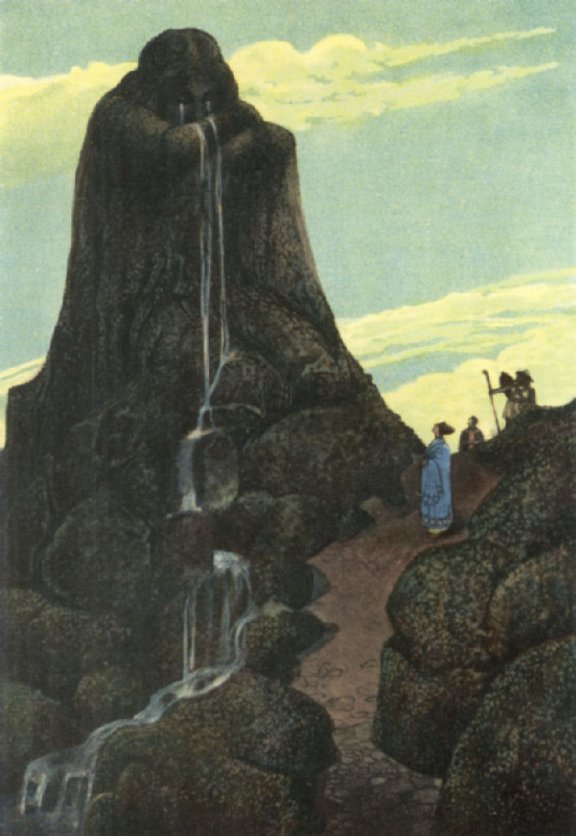 Niobe, Queen of Thebes, was proud of many things. Amphion, her husband, had received from the Muses a wonderful lyre, to the music of which the stones of the royal palace had of themselves assumed place. Her father was Tantalus, who had been entertained by the gods; and she herself was the ruler of a powerful kingdom and a woman of great pride of spirit and majestic beauty. But of none of these things was she so proud as she was of her fourteen lovely children, the seven sons and seven daughters to whom she had given birth.

Indeed, Niobe was the happiest of all mothers, and so would she have remained if she had not believed herself so peculiarly blessed. Her very knowledge of her good fortune was her undoing.

One day the prophetess Manto, daughter of the soothsayer Tiresias, being instructed of the gods, called together the women of Thebes to do honor to the goddess Latona and her two children, Apollo and Diana. "Put laurel wreaths upon your heads," were her commands, "and bring sacrifices with pious prayers."

Then while the women of Thebes were gathering together, Niobe came forth, clad in a gold-embroidered garment, with a crowd of followers, radiant in her beauty, though angry, with her hair flowing about her shoulders. She stopped in the midst of the busy women, and raising her voice, spoke to them.

"Are you not foolish to worship gods of whom stories are told to you when more favored beings dwell here among you? While you are making sacrifices on the altar of Latona, why does my divine name remain unknown? My father Tantalus is the only mortal who has ever sat at the table of the gods; and my mother Dione is the sister of the Pleiades, who as bright stars shine nightly in the heavens. One of my uncles is the giant Atlas, who on his neck supports the vaulted heavens; my grandfather is Jupiter, the father of the gods. The people of Phrygia obey me, and to me and my husband belongs the city of Cadmus, the walls of which were put together by the music that my husband played. Every corner of my palace is filled with priceless treasures; and there, too, are other treasures - children such as no other mother can show: seven beautiful daughters, seven sturdy sons, and just as many sons- and daughters-in-law. Ask now whether I have ground for pride. Consider again before you honor more than me Latona, the unknown daughter of the Titans, who could find no place in the whole earth in which she might rest and give birth to her children until the island of Delos in compassion offered her a precarious shelter. There she became the mother of two children - the poor creature! Just the seventh part of my mother joy! Who can deny that I am fortunate? Who will doubt that I shall remain happy? Fortune would have a hard time if she undertook to shatter my happiness. Take this or that one from my treasured children; but when would the number of them dwindle to the sickly two of Latona? Away with your sacrifices! Take the laurel out of your hair. Go back to your homes and let me never see such foolishness again!"

Frightened at the outburst, the women removed the wreaths from their heads, left their sacrifices and slunk home, still honoring Latona with silent prayer.

On the summit of the Delian mountain Cynthas stood Latona with her two children, watching what was taking place in distant Thebes. "See, my children," she said, "I, your mother, who am so proud of your birth, who yield place to no goddess except Juno, I am held up to ridicule by an upstart mortal, and if you do not defend me, my children, I shall be driven away from the ancient and holy altars. Yes, you too are insulted by Niobe, and she would like to have you set aside for her children!"

Latona was about to go on, but Apollo interrupted her: "Cease your lamentations, mother; you only delay the punishment."

Then he and his sister wrapped themselves in a magic cloud cloak that made them invisible, and flew swiftly through the air until they reached the town and castle of Cadmus.

Just outside the walls of the city was an open field that was used as a race-course and practice ground for horses. Here the seven sons of Amphion were amusing themselves, when suddenly the oldest dropped his reins with a cry and fell from his horse, pierced to the heart by an arrow. One after another the whole seven were struck down.

The news of the disaster soon spread through the city. Amphion, when he heard that all his sons had perished, fell on his own sword. Then the loud cries of his servants penetrated to the women's quarters.

For a long time Niobe could not believe that the gods had thus brought vengeance. When she did, how unlike was she to the Niobe who drove the people from the altars of the mighty goddess and strode through the city with haughty mien. Crazed with grief she rushed out to the field where her sons had been stricken, threw herself on their dead bodies, kissing now this one and now that. Then, raising her arms to heaven, she cried, "Look now upon my distress, thou cruel Latona; for the death of these seven bows me to the earth. Triumph thou, O my victorious enemy!"

Now the seven daughters of Niobe, clad in garments of mourning, drew near, and with loosened hair stood around their brothers. And the sight of them brought a ray of joy to Niobe's white face. She forgot her grief for a moment, and casting a scornful look to heaven, said, "Victor! No, for even in my loss I have more than thou in thy happiness!"

Hardly had she spoken when there was the sound of a drawn bow. The bystanders grew cold with fear, but Niobe was not frightened, for misfortune had made her strong.

Suddenly one of the sisters put her hand to her breast and drew out an arrow that had pierced her; then, unconscious, she sank to the ground. Another daughter hastened to her mother to comfort her, but before she could reach her she was laid low by a hidden wound. One after another the rest fell, until only the last was left. She had fled to Niobe's lap and childlike was hiding her face in her mother's garments.

"Leave me only this one," cried Niobe, "just the youngest of so many."

But even while she prayed the child fell lifeless from her lap, and Niobe sat alone among the dead bodies of her husband, her sons and her daughters. She was speechless with grief; no breath of air stirred the hair on her head; the blood left her face; the eyes remained fixed on the grief-stricken countenance; in the whole body there was no longer any sign of life. The veins ceased to carry blood; the neck stiffened; arms and feet grew rigid; the whole body was transformed into cold and lifeless stone. Nothing living remained to her except her tears, which continued flowing from her stony eyes.

Then a mighty wind lifted the image of stone, carried it over the sea and set it down in Lydia, the old home of Niobe, in the barren mountains under the stony cliffs of Sipylus. Here Niobe remained fixed as a marble statue on the summit of the mountain, and to this very day you can see the grief-stricken mother in tears.

If you use Facebook or Google+ & enjoyed Niobe, please tell your friends and let us know to find more like it for you!