My grandfather, Andrew Coffey, was known to the whole barony as a quiet, decent man. And if the whole barony knew him, he knew the whole barony, every inch, hill and dale, bog and pasture, field and covert. Fancy his surprise one evening, when he found himself in a part of the demesne he couldn't recognise a bit. He and his good horse were always stumbling up against some tree or stumbling down into some bog-hole that by rights didn't ought to be there. On the top of all this the rain came pelting down wherever there was a clearing, and the cold March wind tore through the trees. Glad he was then when he saw a light in the distance, and drawing near found a cabin, though for the life of him he couldn't think how it came there. However, in he walked, after tying up his horse, and right welcome was the brushwood fire blazing on the hearth. And there stood a chair right and tight, that seemed to say, "Come, sit down in me." There wasn't a soul else in the room. Well, he did sit, and got a little warm and cheered after his drenching. But all the while he was wondering and wondering.

Good heavens! who was calling him, and not a soul in sight? Look around as he might, indoors and out, he could find no creature with two legs or four, for his horse was gone.

It was louder this time, and it was nearer. And then what a thing to ask for! It was bad enough not to be let sit by the fire and dry oneself, without being bothered for a story.

My poor grandfather was so dumbfounded that he could only stand and stare.

And with that, out there bounced, from a cupboard that Andrew Coffey had never noticed before, a man. And the man was in a towering rage. But it wasn't that. And he carried as fine a blackthorn as you d wish to crack a man's head with. But it wasn't that either. But when my grandfather clapped eyes on him, he knew him for Patrick Rooney, and all the world knew he'd gone overboard, fishing one night long years before.

Andrew Coffey would neither stop nor stay, but he took to his heels and was out of the house as hard as he could. He ran and he ran taking little thought of what was before till at last he ran up against a big tree. And then he sat down to rest.

He hadn't sat for a moment when he heard voices.

"It's heavy he is, the vagabond." "Steady now, we'll rest when we get under the big tree yonder." Now that happened to be the tree under which Andrew Coffey was sitting. At least he thought so, for seeing a branch handy he swung himself up by it and was soon snugly hidden away. Better see than be seen, thought he.

The rain had stopped and the wind fallen. The night was blacker than ever, but Andrew Coffey could see four men, and they were carrying between them a long box. Under the tree they came, set the box down, opened it, and who should they bring out but--Patrick Rooney. Never a word did he say, and he looked as pale as old snow.

Well, one gathered brushwood, and another took out tinder and flint, and soon they had a big fire roaring, and my grandfather could see Patrick plainly enough. If he had kept still before, he kept stiller now. Soon they had four poles up and a pole across, right over the fire, for all the world like a spit, and on to the pole they slung Patrick Rooney.

"He'll do well enough," said one; "but who's to mind him whilst we're away, who'll turn the fire, who'll see that he doesn't burn?"

With that Patrick opened his lips: "Andrew Coffey," said he.

"I'm much obliged to you, gentlemen," said Andrew Coffey, "but indeed I know nothing about the business."

"You'd better come down, Andrew Coffey," said Patrick. It was the second time he spoke, and Andrew Coffey decided he would come down. The four men went off and he was left all alone with Patrick.

Poor Andrew Coffey couldn't make it all out at all, at all, and he stared at Patrick and at the fire, and he thought of the little house in the wood, till he felt quite dazed.

"Ah, but it's burning me ye are!" says Patrick, very short and sharp.

"I'm sure I beg your pardon," said my grandfather "but might I ask you a question?"

"If you want a crooked answer," said Patrick; "turn away or it'll be the worse for you."

But my grandfather couldn't get it out of his head; hadn't everybody, far and near, said Patrick had fallen overboard. There was enough to think about, and my grandfather did think.

Sorry enough my grandfather was, and he vowed he wouldn't do so again.

"You'd better not," said Patrick, and he gave him a cock of his eye, and a grin of his teeth, that just sent a shiver down Andrew Coffey's back. Well it was odd, that here he should be in a thick wood he had never set eyes upon, turning Patrick Rooney upon a spit. You can't wonder at my grandfather thinking and thinking and not minding the fire. 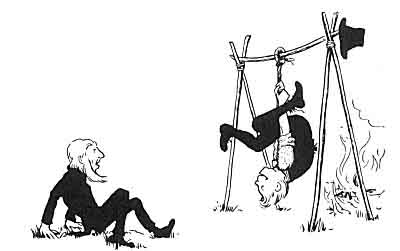 And with that what did my grandfather see, but Patrick unslinging himself from the spit and his eyes glared and his teeth glistened.

It was neither stop nor stay my grandfather made, but out he ran into the night of the wood. It seemed to him there wasn't a stone but was for his stumbling, not a branch but beat his face, not a bramble but tore his skin. And wherever it was clear the rain pelted down and the cold March wind howled along.

Glad he was to see a light, and a minute after he was kneeling, dazed, drenched, and bedraggled by the hearth side. The brushwood flamed, and the brushwood crackled, and soon my grandfather began to feel a little warm and dry and easy in his mind.

It's hard for a man to jump when he has been through all my grandfather had, but jump he did. And when he looked around, where should he find himself but in the very cabin he had first met Patrick in.

"Is it a story you want?" said my grandfather as bold as may be, for he was just tired of being frightened. "Well if you can tell me the rights of this one, I'll be thankful."

And he told the tale of what had befallen him from first to last that night. The tale was long, and may be Andrew Coffey was weary. It's asleep he must have fallen, for when he awoke he lay on the hill-side under the open heavens, and his horse grazed at his side.

If you use Facebook or Google+ & enjoyed Andrew Coffey, please tell your friends and let us know to find more like it for you!