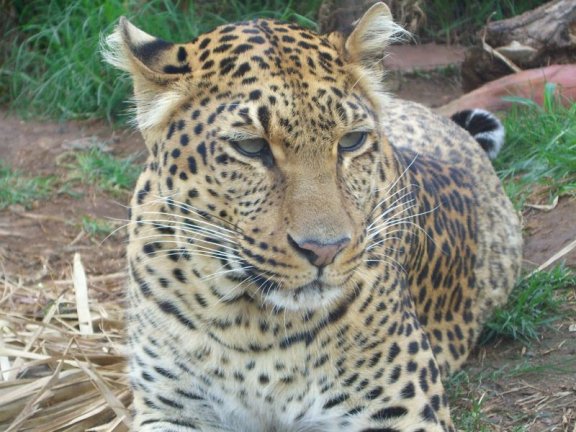 The leopard one day bet his life to the antelope, that if he hid himself the antelope would never find him.

"Well," said the antelope, "I accept your bet. Go and hide yourself."

After some time the leopard set out to seek the antelope. He searched the woods through and through, but could not find him. At last, thoroughly worn out, he sat down, saying: "I am too fat to walk any more; and I am also very hungry. I will pick some of these nonje nuts, and carry them to my town and eat them."

So he filled the bag he carried under his arm (called nkutu), and returned to his town. Once there, he determined to call his people together, and continue his search for the antelope after breakfast.

So he knocked his ngongo, and ordered all his people to assemble, from the babe that was born yesterday, to the sick men who could not walk and must be carried in a hammock. When they were all there, he ordered his slaves to crack the nonje nuts. But out of the first nut that they cracked jumped a beautiful dog.

Now, the leopard was married to four princesses. To one by common consent, to another by the rites of Boomba, to the third by the rites of Funzi, and to the fourth by those of Lembe, Each of his wives had her own cooking-shed.

But as the dog was dying, it changed into a beautiful damsel. And when the leopard saw this beautiful maiden, he longed to marry her, and straightway asked her to be his wife.

The beautiful girl answered him and said: "First, kill those four women who killed the little dog."

The leopard immediately killed them. Then the maid said:

"How can I marry a man with such dreadful-looking nails. Please have them taken out."

The leopard was so much in love with the maiden, that he had his claws drawn.

"What fearful eyes you have got, my dear leopard! I can never live with you with those eyes always looking at me. Please take them out."

The leopard sighed, but obeyed.

"I never saw such ugly ears; why don't you have them cut?"

The leopard had them cut.

"You have certainly the clumsiest feet that have been seen in this world! Can you not have them chopped off?"

The leopard in despair had his feet taken off.

"And now my dear, dear leopard, there is but one more favour that I have to ask you. Have you not noticed how ugly your teeth are? how they disfigure you? Please have them drawn."

The leopard was now very weak, but he was so fascinated by the girl, and so hopeful now that he would obtain her by this last sacrifice, that he sent to the cooking-shed for a stone and had his teeth knocked out.

The maiden then saw that the leopard was fast dying. So she turned herself into the antelope, and thus addressed him:

"My dear leopard, you thought to kill me to avoid giving your life to me, as promised, when I found you. See now how I have outdone you. I have destroyed you and your whole family." And this is why the leopard now always kills the antelope when he meets one.

If you use Facebook or Google+ & enjoyed The Antelope and the Leopard, please tell your friends and let us know to find more like it for you!