"Be the work good or bad, we cannot tell what may be said of it, nor how far its result may spread.(Tibetan Proverb.)" 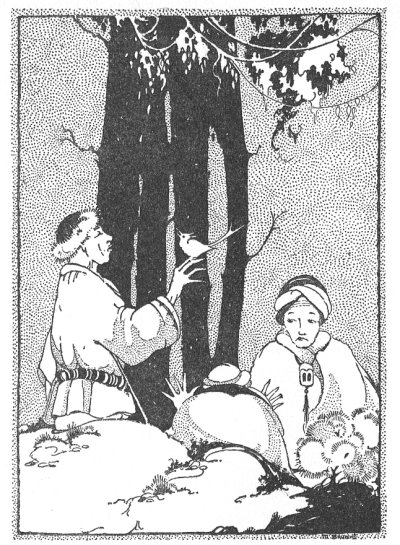 Once upon a time, when the world was young and men loved and hated as they do now, in a mountain village there lived three brothers and they were hunters. Each of the brothers had married a wife, and they had one sister who lived with them all. One day they went out to hunt and brought in a deer. When they had all the meat they wanted to eat they gave a leg bone to the sister, who cracked it, took out the marrow and toasted it, so that it looked very good. As she sat eating this delicacy, the wives of the two elder brothers became very angry, just why it would be difficult to say. They were so angry that they decided they would plan some way to kill the sister. They said, "The brothers think so much of her that they won't consider us at all, so we must get her out of the way."

Again the brothers all went out for a hunt, and the women decided now was the time. The wife of the younger brother would have nothing to do with it and told them it was the wrong thing to do, because the sister had had only her share of the meat. But the wives of the two older brothers decided to kill her anyway. When the brothers were coming home they stopped on the way to rest and a little bird in a tree kept singing and singing the same tune over and over. Finally one of them said, "That bird seems to want to say something to us, I'm going to see if it does, for it sounds like my sister." He went up to the tree where the little bird sat and said, "If you are my sister, hop up on my hand." The little bird hopped on his hand and they all began to cry, because they knew their sister was dead. They went on home and found the three wives, but the sister was gone. They said nothing about her being away, but later they found the younger wife crying and she wouldn't tell why. They told her they knew why, as they had seen the sister, and her soul had gone into a bird. So the young wife told them the story, and they were so angry that they killed the two big wives and had the third in partnership.

If you use Facebook or Google+ & enjoyed The Story Of The Three Hunters, please tell your friends and let us know to find more like it for you!