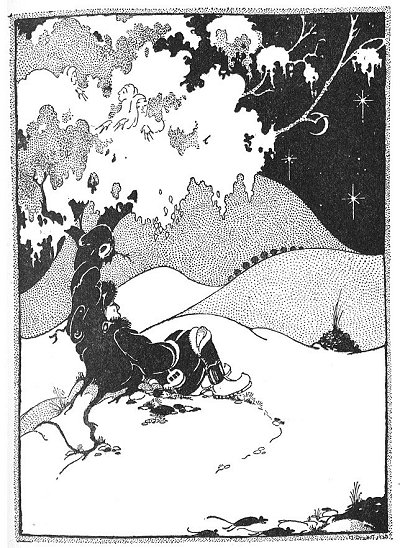 Once, long ago, in this land of mystery, where men lived and loved and wondered and died, lived a man named Drashup, who was all alone in the world. All his kin were dead. He had no wife, no children, and he was very, very poor. One day he wandered away upon the mountain and lay down and went to sleep, grieving over his troubles.

Just at this time, in a small village far below at the foot of the mountain, a little girl was born. In the tree under which the man was lying asleep dwelt a goddess. All around him in the wood dwelt a number of goddesses, and it was their duty to cast lots and foretell this new little lady's future: who her husband would be, when she was to be married, if she would live to be old, and the day of her death. The goddess who lived in the tree under which Drashup was sleeping invited all the others to come to her tree, as she had a guest asleep near her dwelling. So they came and began to forecast the lady's future:--She would be only middle-aged when she would die from eating the shoulder of a sheep and the man asleep under the tree was to be her husband.

The man was not very sound asleep and overheard all these predictions, which made him very angry, and he said, "Such talk! It is all foolishness. I'm a middle-aged man now and the very idea that I'm to be the husband of a baby just born."

But nevertheless he started out to hunt this child. He traveled and traveled up and down the country, and finally found in the village at the foot of the mountain, a little girl who had been born on that very day, and he knew that it was she about whom they had been speaking. So he slipped quietly up by the side of the house, picked up a small ax used to chop firewood, slipped around where the girl was and struck her. Believing he had killed her he ran away into a far country; but she recovered and grew to womanhood.

By and by the girl's parents died and she was left an orphan with nothing at all, so she left her home and went traveling. By chance she went to the city where Drashup had taken up his residence. They met one day and instantly fell in love. As he was talking to her one time, he saw a big scar on her head and asked her how it came to be there.

"My parents told me that one time a man named Drashup took an ax and tried to kill me, in the village where I was born," she told him.

When Drashup heard this, he knew there was no use to try to get away from the words of the future foretold by the goddesses of the mountain, but he didn't tell her how she was to die, though he remembered that, also.

They were married and lived happily, though he was so much older than she. But he was always very careful to take the shoulder of the mutton for himself and see that she never got any of it. She, however, wondered why he always wanted the shoulder for himself, and one day when he was absent from home on business she killed a sheep and said, "As Drashup isn't here I'll eat the shoulder myself." After eating it she remarked, "It was awfully good, no wonder he always wanted it himself." Then suddenly she became violently ill and Drashup found her dead when he came home, and knew for sure that never could any one get away from the decision of the goddesses.

If you use Facebook or Google+ & enjoyed The Story Of Drashup And The Goddesses, please tell your friends and let us know to find more like it for you!