"Between iron and brass there is union if the welding is skillful. (Tibetan Proverb.)" 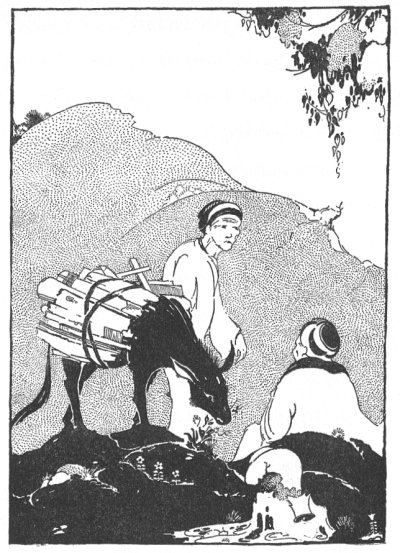 A very long time ago, somewhere in that far away land of Tibet, away up so high that it seems a little nearer the sky than any other land, in one corner was a country governed by a very just man. He was noted in all parts of the dominion for his fair judgment in all cases. In the city where this good king lived and had his home, dwelt two poor men. Both were very good, did the very best they could every day and each had an old mother to support.

One day one of the men started to a village high up in the mountains carrying a jar of oil, selling it as he went. Walking along, he grew very tired and set his jar of oil on a rock by the roadside while he sat down to rest a while. As he sat there, his neighbor came down the mountain driving his donkey in front of him. There were two big loads of wood stacked one on each side of the little donkey, which almost covered him. He didn't happen to see the jar, so came too near and knocked it off, breaking it, and spilling all the oil.

The man who owned the oil was very angry indeed, and the man who owned the donkey said it wasn't he who had done the damage, but the donkey. So they quarreled and quarreled and kept on quarreling. The man who owned the oil said he couldn't afford to lose it, as it was all he had in the world to sell for food for his mother and himself, and it couldn't have been his fault the jar was broken. They both went to the king who questioned them very carefully about the matter and finally said he couldn't see that either one was to blame. They were both good men, took good care of their old mothers and were honest in all their dealings, and so far as he could see no one was at fault but the donkey and the rock, and he would judge them. So the little donkey was chained with chains around his legs and around his neck and led into prison, while five of the king's men were sent out for the rock. As soon as they brought it in he ordered it wrapped with chains and tied outside the prison door to a post. By this time the news of this strange case and the queer doings of the king had spread throughout the city. When the people heard their great king was having a trial about a donkey and a rock they thought he had surely gone mad. The next morning the king announced by his runners through the city that the case would be tried. The idea that a donkey and a rock could have a trial in court was more than the people could understand, but early next day everybody in the city was at the courtyard to see the result of the trial. When the time arrived the judge came, took his seat, instructed the door-keepers to shut and lock all the gates, thus locking in everybody, and then proceeded to pronounce his judgment on the case.

"As you very well know, there is no law by which a donkey and a rock can be judged. Why have you all come to see so absurd a thing? Now, because of your curiosity in the matter, every one of you shall pay a half-cent before he gets out."

The people, looking much ashamed, and glad to get out, handed over this bit of money and slipped through the gate. The cash taken in this way was given to the man who had lost his oil, so he was happy, the debt was paid, and the court closed.

If you use Facebook or Google+ & enjoyed The Story of the Donkey and the Rock, please tell your friends and let us know to find more like it for you!