"The male deer from the top of the hill can see afar off. But the goose on her nest thinks only of the egg she covers.(Tibetan Proverb.)" 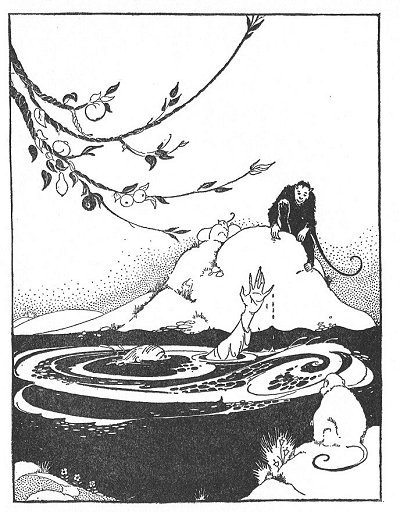 Once upon a time when the garden of Eden was in the world, a man traveling around the country found the garden and went in through the gateway. He thought it a very beautiful place. There was everything good to eat, cakes and candies and fruits of all kinds. He said to himself, "Here I'll stay. I won't have to work any more, for everything I need is here, so here I'll remain." He thought he would take a nap, and crawled up one of the big trees and went to sleep among the branches. But he slept too soundly and forgot he was up the tree, and went to turn over and tumbled into a lake. One of the monkeys in the forest saw him fall into the water and tried in every way to help him out, and finally said, "I'm too little. I can't pull you out, but if I can grow big and strong I'll be able to help you out." So he began to exercise every day by picking up small stones, and then every day a little larger one, until finally he grew strong enough to lift a big stone, and so was able to get the man out of the water. After the man was rescued he didn't feel very well and the monkey proposed that he exercise a while with the stones. He threw the stones about a while until he felt quite warm, then thought he'd go to sleep again, but this time he'd lie down on the ground. The monkeys were all in the trees talking and chattering, so he didn't sleep very soundly. When he roused up he thought, "This is a beautiful place if there just wasn't so many monkeys." (I guess he forgot how much one of them had just helped him.) "If these monkeys would all die, I'd go home and get my family and stay here, because we wouldn't have to work at all."

By this time it was evening and the monkeys were all asleep in the trees. So he shook all the trees until the monkeys fell out on the ground and were killed by the fall. Then, quite well satisfied with himself, he started home to bring his family back to the garden to live. But on the way the monkey god, who looks after monkeys, good and bad, and knew the man had been mean to the monkeys when they had been kind to him, turned himself into a big snake, met him on the path and swallowed him.

If you use Facebook or Google+ & enjoyed The Man And The Monkeys, please tell your friends and let us know to find more like it for you!