"As you desire the sun, so you desire your friend's return. (Tibetan Proverb.)" 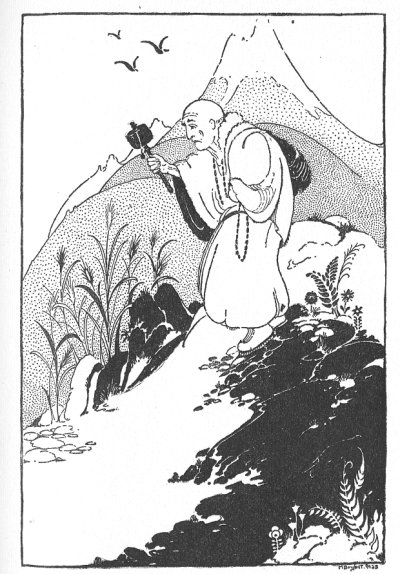 Once upon a time a man was walking along a narrow mountain path, when he met a ghost. The ghost turned around at once and walked along beside him. The man was very much frightened, but didn't care to let the ghost know it. Pretty soon they came to a river which had to be crossed, and as there was no bridge or boat both had to swim it. The man, of course, made a good deal of noise, splashing and paddling the water, while the ghost made none at all.

Said the ghost to the man: "How does it happen that you make so much noise in the water?"

The man answered, "Oh, I am a ghost and have a right to make all the noise I want to."

"Well," the ghost replied, "suppose we two become good friends, and if I can help you I will, and if you can ever aid me you will do so."

The man agreed, and as they walked along the ghost asked him what he feared more than anything else in the world. The man said he wasn't afraid of anything he saw, though inwardly quaking all the while. Then he asked the ghost what he was afraid of. "Of nothing at all," said the ghost, "but the wind as it blows through the tall-headed barley fields."

By and by they came near a city, and the ghost said he was going in to town. But the man said he was tired and that he would lie down and sleep a while in the barley field at the edge of the city. The ghost went on into town and played havoc, as ghosts generally do. He proceeded to steal the soul of the king's son and tying it up in a yak hair sack carried it out to the edge of the barley field where the man lay asleep, and called out to him, "Here is the soul of the king's son in this bag. I'll leave it here for a while and you can take care of it for me, as I have a little business elsewhere."

So saying, he put the sack down and went away. The man now disguised himself as a holy lama, begging tsamba, and, carrying his prayer wheel and the sack, started for the city. When he arrived he heard at once that the king's son was about to die and he knew what was the matter with him. So he went to the palace begging and the king's chamberlain said to him, "You are a very holy man, perhaps you can do something to help the king's son get well." The man said he would try if they would let him in to see the king.

When the king saw him he said, "If you will heal my son, I'll give you half of all I have, lands, gold, cattle and everything." So the man said he would. He took his yak hair sack, sat down on the ground, cross-legged, as all Buddhists sit, made a little idol of tsamba meal, opened the sack and thrust it in, allowing the soul to escape. Then he tied the mouth of the bag with nine knots, blew his breath upon it, said many charms and prayers over it, and while he talked, lo, they brought the king word that the boy was recovering. The father was so pleased and happy, he kept his word and gave the man half of all he possessed. The ghost never, so the story goes, came back or claimed the sack he had left with the man, and the man thought, "Perhaps that is the customary etiquette between a man and a ghost."

If you use Facebook or Google+ & enjoyed The Man And The Ghost, please tell your friends and let us know to find more like it for you!