"When life ends you may arise and have peace with Droma, but nevertheless it's a great calamity when the rock rolls down the mountain and takes your life.(Tibetan Proverb.)" 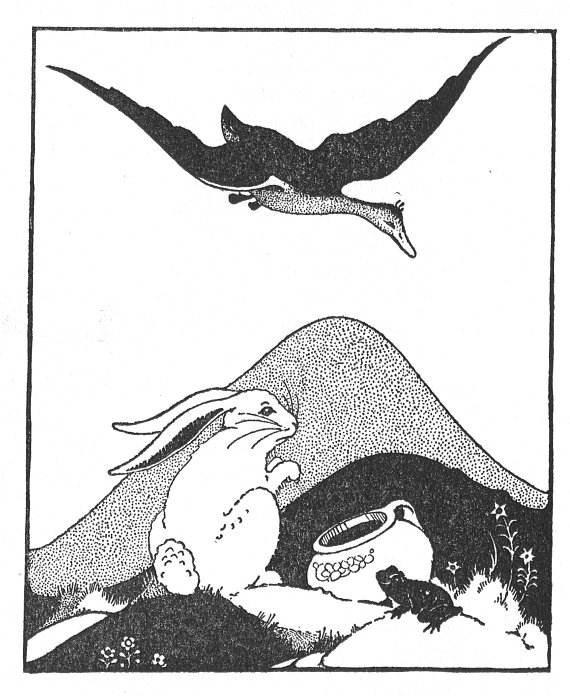 Once upon a time, on the top of a mountain which was quite flat and covered with grass and flowers, a frog and a rabbit were playing around, having a good time. In the midst of their fun, they found a beautiful golden pot. The frog exclaimed, "See what I have found. It's all mine! What a lot of money I shall have."

The rabbit said angrily, "It's mine, I saw it first."

And soon they were fighting fiercely. But all at once the rabbit stopped and remarked, "This won't do, let's go to the foot of the mountain and race back to the top, and the one that gets here first and gets in the pot shall have it, to-morrow to be the day of the race."

The rabbit was sure of success because he knew he could run and was certain the frog couldn't. The frog knew well enough he couldn't possibly win in that kind of race, so he thought of a scheme. He found two of his friends exactly like himself in every way. One, he took to the top of the mountain and put in the pot, the other he placed half way down the mountain, and located himself at the base. When the rabbit came next morning and they were ready to start on the race, the frog gave a few hops while the rabbit skipped on ahead. Much to his astonishment, when he got half way up the mountain, there was the frog hopping wildly along in front of him. He said to himself, "I must do better than this," and away he flew like the wind. But on reaching the summit there sat the frog in the pot. The rabbit had lost the race and also the gold.

Now, the frog didn't know how to get that big pot down the mountain, and while he was puzzling over it, a big duck, very dark in color, with mouse-colored breast, flew over him, stopped a minute, and asked his trouble. The frog told him what was the matter and asked if he could carry the pot to the bottom of the mountain. The duck said he could and would do so if he might have half. As there was nothing else to be done, the frog agreed and the duck carried it down for him, so there it was divided and the duck thought it was so beautiful that he took his half and smeared it on his breast, and that's where the sacred duck got his beautiful golden breast.

Note: On the tops of the mountains in Tibet and near the lakes are found these beautiful ducks.

They are very tame and have no fear of people, as they are held to be sacred by the Tibetans, who believe them to be a reincarnation of some holy man because of the beautiful yellow color, which is their sacred color.

If you use Facebook or Google+ & enjoyed How The Sacred Duck Got His Yellow Breast, please tell your friends and let us know to find more like it for you!