"To your foe do not give a promise, for he carries a sword.(Tibetan Proverb.)" 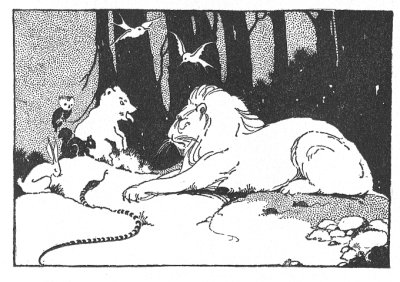 A long, long time ago, before the mountains were melted, and the trees were burned, and the animals all died, the sun was so hot that the mountains all ran down level with the plains. Then the king of beasts on the earth was the lion, and every morning all the animals had to come and kotow to him. One day there was a rabbit in a nice soft bed of grass, feeling so comfortable that he didn't want to go and kotow to the king. He didn't see any use of it, didn't know exactly where the lion was, and he was having too good a time anyway. All of a sudden the king stood before him looking like a thunder cloud. He spoke and said, "You little split-nosed rascal, here you are having a nice time eating grass, and have not come to kotow to me. All the other animals have made obeisance this morning. You do not value your life at all, do you?"

The rabbit thought, "If I don't tell this lion a lot of big lies, he will surely kill me, so I must tell them to save myself." Very politely, he said, "This morning when I got up to go to make my obeisance to you, I came to a stream of water, and in it was a big she-devil and I was afraid, and ran up here a few minutes ago to hide in this grass."

The lion asked, "Did that devil harm you?"

"No," answered the rabbit, "she didn't hurt me, she only yelled as I went by and my heart seemed as if it would break into two pieces, and that was enough for me. She asked, 'You little short-footed fellow, where are you going so fast?' I answered, 'I'm going to make my obeisance to the king of beasts.' Then she said, 'Well, we are going to see about that, son, and find out who is greater, he or I. I've hunted every place for this lion and can't find him, so when you go to kotow to him, you tell him for me, that I want him to come here where I am in this water, and we will see who is to be the ruler of the beasts.' So if you have anything to say to her I'll go take the message, as it would not do for you to go down there."

The lion answered, "I haven't anything to tell you, but I have something to say to that devil, and I'll go down and say it myself. There isn't anything on earth or any devil that can be bigger or think themselves bigger than I am, or more able to rule the beasts, for I'm the biggest there is. If she whips me, I'll be the same as a dog and let her rule."

The rabbit thought, "I'm in for it now, I'll lead him down and let him see for himself." He led him to the stream, and when the lion saw his reflection his hair all bristled up and his tail lashed from side to side. The rabbit, dancing up and down, yelled, "There she is, there she is." Whereupon the lion flew into a great rage, jumped into the water to fight and drowned himself.

If you use Facebook or Google+ & enjoyed How The Rabbit Killed The Lion, please tell your friends and let us know to find more like it for you!