"The shepherd will protect his flock of sheep and without power can save a hundred lives.(Tibetan Proverb.)" 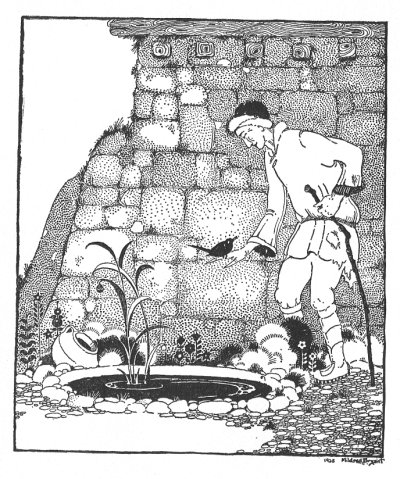 One time in a corner of the world, high up among the mountains, there lived two old men who were very good friends. Each had a small garden patch. One was a good old man, naturally; that is, he didn't have to try very hard to be good, for his heart was pure, he loved all animals and birds and was very happy in his little garden. But the other old man wanted very much to be wealthy. One day the first old man found in his garden a little, crippled bird. He took it and cared for it, felt sorry for it, healed it and fed it every day. Then he was able to fly away, and the old man let him go. He soon returned bearing a seed in his mouth which he gave to the old man, saying, "You plant this seed--it's a very fine squash seed, the very finest in the world, and be sure you tend it well."

So the old man planted it and watered it, and at last there grew on the vine just one squash, but it was monstrous big. When cold weather came and it was fully ripe the old man tried to pull it and take it into the house, but he couldn't carry it and had to call five men to help him get it in. By and by he wanted to eat some and peeled off the outer skin, which was very thin like paper, and when he cleaned it, he found it to be solid gold. Now, he was very rich, but he made good use of his money and gave to the poor and aided all who were needy. His old neighbor came over one day and asked him where he got the seed for that squash, and he told him the story of the little bird. The old man went home, very envious, and thought he would think up a plan so that he would be rich too.

He got his bow and arrow and slipped out into the garden and waited until he saw a little bird light on a tree. Then he deliberately shot, breaking its leg. Picking it up carefully, he pre-tended to be grieved over its hurt and tended the little thing until it was finally well and able to fly away. One day sure enough the bird flew back bringing a seed which he told the man how to plant and care for because it was very wonderful indeed. It sprouted and grew and grew until finally when winter came he had to have five or six men help him carry his squash into the house. He was much delighted, for he thought, "Now I shall be rich, too." He could hardly wait until he could get his knife and cut the skin, but he had no more than broken it when it popped wide open and out jumped a fierce old man, who said he was sent by the king of the lower regions to weigh him. He grabbed him by the back of the neck and set him on the scale which he carried and said, "You are far too light and no use at all," and at once took him out and cut off his head.

So much for the sin of covetousness.

If you use Facebook or Google+ & enjoyed The Golden Squash, please tell your friends and let us know to find more like it for you!