"If the yak is blind he will tumble off the road.(Tibetan Proverb.)" 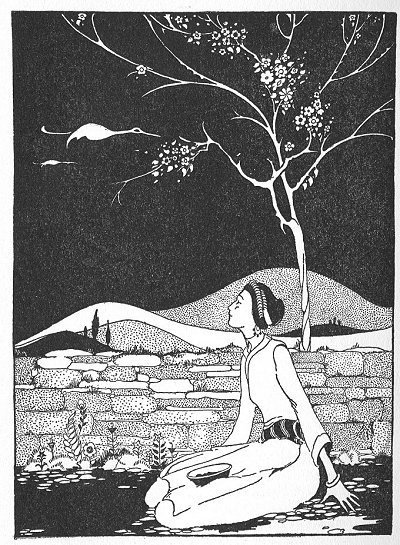 Once upon a time, a long, long time ago, in a little mud village, lost somewhere now in the mountains of Tibet, lived a group of people. A tiny stream of water from underground, perhaps from a magic horse's head or a magic cow's head, flowed and never went dry. This stream gave them all the water they needed.

Ruling over this village was a chief whom they called the head-man of the village. He settled all their small quarrels, punished offenders and his word was law up to the matter of life and death. He had a very handsome son, who had no wife. The middleman had made a marriage, all sides agreeing, between this son and the daughter of a prince who ruled over a slightly bigger territory. This prince, with a hundred men and their musical instruments, dancers and singers, gifts for the family, milk money for the mother and wedding gifts of jewels to the bride, went down to claim his wife. The head-man feasted and kept them exchanging gifts for about three days, then they started to return, taking the bride with them.

The mother followed her to the door, as she was leaving, and said, "Do not grieve because you are leaving home. In one month you can come back and visit us."

Her father and big brother and little sister all said, "Don't be sorry, for now you are the wife of this big prince, and will have plenty to eat and nice clothes to wear," and her mother said, "You must keep as clean as if you were looking in a mirror all the time. You must be good to your own servants and kind to your husband's parents, and also be charitable and give to the poor. You mustn't say bad things, as that's just as silly as a billy-goat trying to butt down a stone wall with his horns."

So they tried to comfort her as she went away weeping, and told her to be happy and contented.

Now the greater part of the caravan had gone on before and only she and a few of the maid servants were left behind. Those in advance went on and on and when night came, they stopped in a fine valley and prepared to camp for the night.

By and by when she came up to them she said, "This won't do. This is a bad place, for if it should rain everything, including ourselves, would be washed away."

She went on a little bit farther, found another spot and sent back word to them to come up there where she had stopped. As the loads were already off the yak and all was prepared for the night they were very angry because all the loads had to be tied on again, the ponies gathered in from where they were grazing, and only to go such a little distance!

They said to one another, "This woman is unspeakable. She comes from a very common home, but now she is the wife of this prince she thinks she can make us do as she likes." So grumbling a great deal, they unloaded and made camp again for the night. But sure enough that night a big rain came and washed everything out of the valley where they had first stopped. When they saw that they said, "If we had been there everything would have been lost and we would have been dead. She is a prophetess and knows all things. We owe our lives to her."

So they journeyed on and came to her husband's home, where they feasted again for three days. Now it was time for the servants her father had sent with her to return. She gave them all gifts, told them good-by and sent them back to her father's house.

Now some of her husband's servants had heard her mother tell her she was to keep as clean as if she were looking in a mirror all the time. So they went to the prince and asked him what it meant, that they didn't understand that saying at all. When she got up in the morning, she swept the house and combed her hair and saw that every-body had food before she would eat anything. One day her husband said to her, "What did your mother mean by that saying?"

She answered, "My mother's meaning was this: that I wasn't to be greedy and eat good things all the time, but if I waited on others I'd be hungry and things would taste good to me. And looking in the looking glass meant I was to keep myself clean and the house clean so I'd never be ashamed of it."

One day a big crane coming from near the sea was carrying a few heads of rice for his own food; as he flew over the palace, he dropped a few of the grains, which the servants gathered up and took to the mistress of the house. She said to them, "We must plant a few of these seeds and be careful with them, for they make fine medicine for fevers."

They divided the grains among the different families, who took them home and planted them. After a while the king's wife took sick with the fever and he called all his chief head-men of the surrounding villages and all the lamas, who told him that if she didn't have some rice from near the sea she would die. Then he sent out to all the people he knew, asking if they had any rice, but none of them had a grain. Finally he sent to this woman, the wife of the prince, and asked if she had any rice, and she said, "Of course I have. Not only for her but for all the sick people in the country."

So she sent some to the king's wife, who got well, and she gave it also to all the other sick folks, and from this time on the people worshiped her and always went to her in times of trouble.

If you use Facebook or Google+ & enjoyed The Frugal Woman, please tell your friends and let us know to find more like it for you!