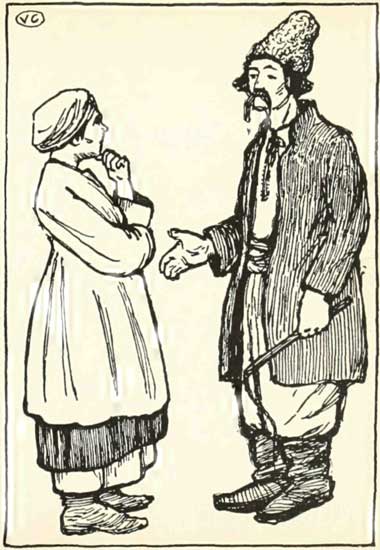 Once upon a time there lived a man and his wife, and they had a goat and a ram. 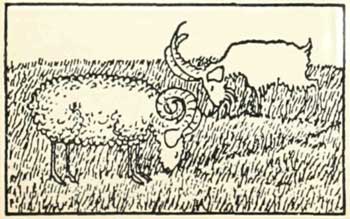 And one day the man said to his wife: "Look here, let's get rid of the ram and the goat; why, they only keep eating our corn, and don't help to feed us at all!" 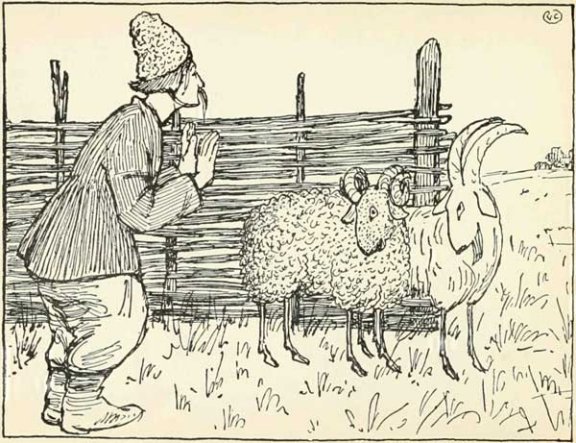 So he told them: "Be off, goat and ram, and don't dare to show yourselves at my gate ever again." 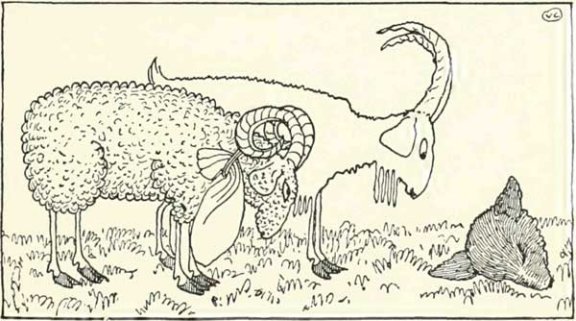 So the goat and the ram made themselves a bag, and went off. And they went on and on, when suddenly they saw a wolf's head lying in the middle of the field. 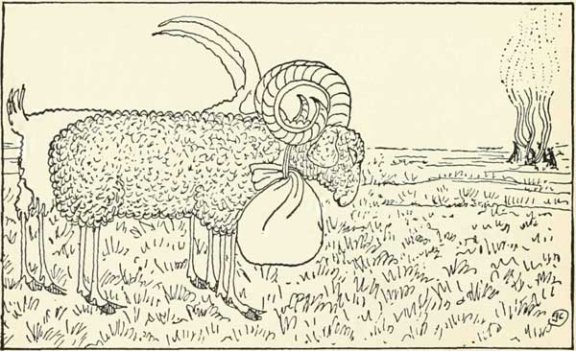 And they picked up the head, put it in their bag, and went on again. And they went on and on, when suddenly they saw a fire burning, and they said: "Let's go and spend the night there, lest the wolves should eat us." 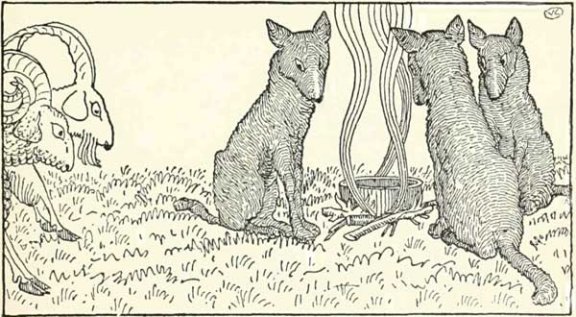 But when they got there, lo and behold! it was the wolves themselves who were cooking their porridge, and so they said: "Good evening, young fellows, and good appetite to you!" And the wolves answered: "Good evening, Mr. Goat and Mr. Ram! We're just boiling our porridge, come and have some, and then we'll eat you both up." At this the goat took fright, while as for the ram, his legs had been shaking with fear for some time. Then the goat began to think, and he thought and thought and at last he said: "Come now, Mr. Ram, let's have a look at that wolf's head you've got in your sack!" And the ram took out the wolf's head, when the goat said: "No, not that one. Let's have the other bigger one!" And again the ram gave him the same head, but he said: "No, not that one either! let's have the largest of all!"

And the wolves looked, and thought the ram had a whole sackful of wolves' heads, and each one of them said to himself: "Well, these are nice guests to have! I'd better hop off!" And first one said aloud to the others: "I like your company all right, brothers, but somehow, the porridge doesn't seem to be boiling very well. I'll just run and fetch some sticks to throw on the fire." And as he went off, he thought to himself: "You and your company be bothered!" - and never came back. 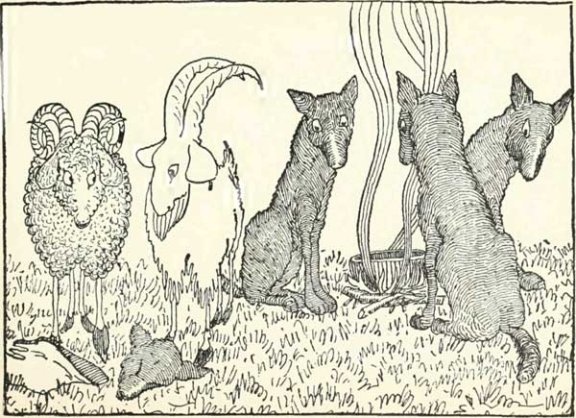 Then the second wolf kept thinking how he could get away, and he said: "It seems very funny, our brother went to fetch the wood, but he hasn't brought the wood, and hasn't come back himself. I'll just go and help him!" 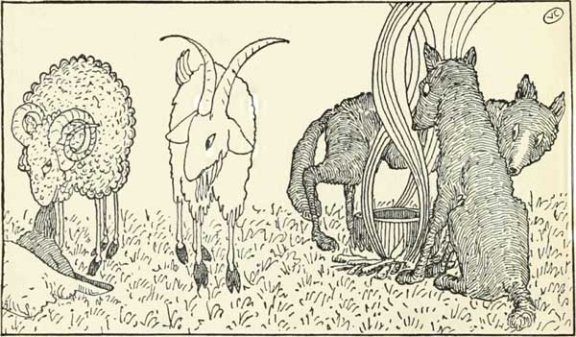 So off he went too, and never came back. And the third wolf was left sitting there, and at last he said: "I must really go and hurry them up. What are they dawdling all this time for!" And as soon as he was gone, he set off running and never so much as looked back. 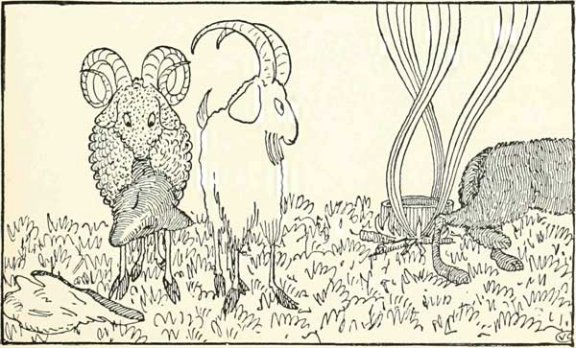 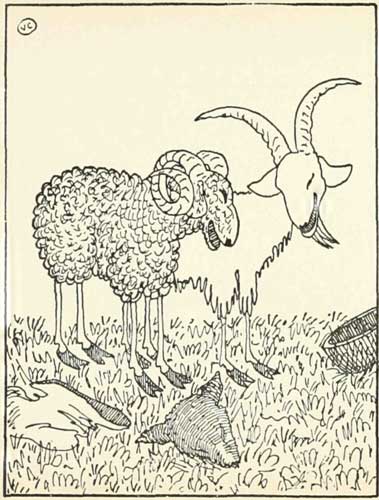 And at that the ram and the goat were delighted. They ate up all the porridge and then ran away themselves.

Meanwhile the wolves had all three met, and they said: "Look here, why were we three frightened of the goat and the ram? They're no stronger than we, after all! Let's go and do them in!" 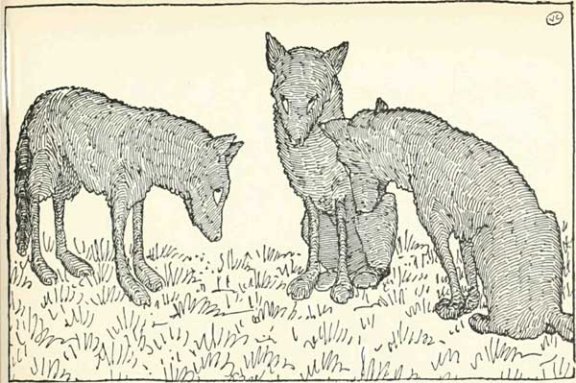 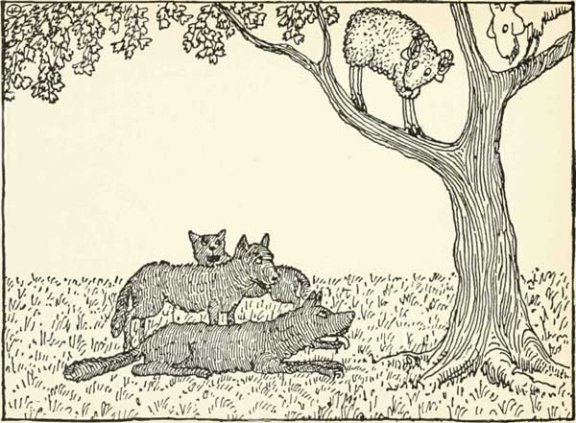 But when they came back to the fire, there was not so much as a trace of them left. Then the wolves set off in pursuit, and at last they saw them, where they had climbed up a tree, the goat on an upper and the ram on a lower branch. So the eldest wolf lay down under the tree, and began to show his teeth, looking up at them, and waiting for them to climb down. And the ram, who was trembling all over from fright, suddenly fell down right on top of the wolf, and at the same minute the goat shouted out from up above: "There, that's the one! get me the largest of all!" And the wolf was terrified, because he thought the ram had jumped down after him, and you should just have seen him run! And the other two followed after. 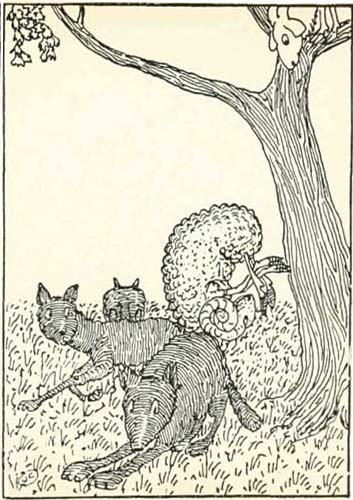 If you use Facebook or Google+ & enjoyed The Goat And The Ram, please tell your friends and let us know to find more like it for you!