If you look at the kind of dog that sleeps on his master's front porch and begs for a bone at dinner and crawls away when his master shakes a stick at him you will see that this dog's ears do not stand up bravely. They flop. And his tail does not stand up, but hangs close to his legs. This dog acts as if he remembers something for which he is ashamed. Perhaps he does. A long time ago one of his ancestors did something that caused the race of dogs owned by the Indians to lose their pride.

Before the dog left his wild cousin the wolf and came out of the woods and off the prairies to live with man he was as wild as the wolf. His sharp ears stood straight up, always ready to warn him of an enemy so that he would be ready to fight. He held his tail high, for he was a free animal and full of pride. And he was afraid of no man. 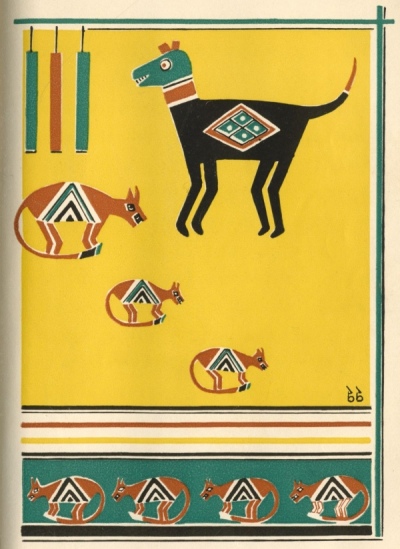 One time the dog could find no food for many days, and he went close to the camp of a tribe of Indians to see if he could find something to eat there. He saw strips of deer and bear meat hanging on poles to dry. One of the Indians was turning the meat so that all parts of it would be dried by the sun. The hungry dog went to him and told the Indian that if he would give him a piece of the meat he would stay in the camp to live with the Indians and fight all other animals that came around the camp.

The Indian thought this was a good idea and he agreed to feed the dog. And so for the first time the dog became a friend of man. He fought off the bears and wildcats when they came too close. He helped the Indians when they hunted for rabbits. He barked at night if enemies came around. But the dog still held his ears straight and kept his tail proudly raised over his back, for he was not afraid of anything.

Then one night some of his wild cousins, the wolves, came to where the Indians lived. At first the dog growled and would not let them pass, but when they told him that they only wanted to see how he liked his new friends, the Indians, the dog stopped growling and began to talk with some of them. He didn't see the others sneak around his back and begin to steal meat that hung drying on the poles. At last they got all the meat. Then they laughed and ran off as fast as they could while the dog barked in anger.

But it was too late to bark now. The meat was gone. When the Indians woke and ran out of their wigwams they saw that the meat was gone and began to beat the poor dog and shout at him. He was so ashamed the wolves had fooled him that for the first time in his life his ears flopped down and his tail fell between his legs. He whined and crawled on his belly in the dirt. The poor dog looked so sorry that at last the Indians left him alone. But from that time on he lost his pride. He became afraid when men shouted at him and that is the way he remains today.

If you use Facebook or Google+ & enjoyed Why The Dog's Ears Flop, please tell your friends and let us know to find more like it for you!