White men teach that the moon is a dead, empty world. Yet there was a time, says an Indian legend, when a tribe of Indians lived and hunted there. The chief of that tribe had a lovely daughter who at one time visited the earth and who flung down from the sky, after she had returned to her father's home on the moon, a handful of bright little stars which took root and grew as flowers. She did this because she loved the son of a chief on the earth.

The tribe of Indians who lived on the moon never went into the narrow ring we see running around the moon when it is new. That was because the ring was a great forest without paths and filled with evil spirits. No Indian who had gone towards that forest of white, leafless trees ever came back to the tribe, and because of this the people knew that it was full of dangers.

The daughter of the chief of the moon tribe one day went close to this forest. She could do things which other daughters of the tribe could not do, because her father did not want her to marry and leave him, but allowed the young girl to do other things as she pleased. Thus it happened that the lonely daughter of the chief was wandering by herself when she came upon the edge of the great forest that looks like a silver rim on the edge of the new moon. Deep inside she saw a gleam of light that blinked like a dull red eye. 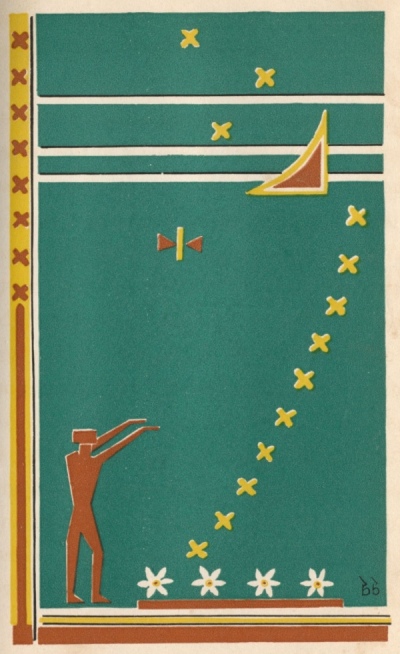 The daughter of the moon chief decided to enter the forest. After she had pushed. through the white bushes, which made no sound at her touch, she at last came to a cave, and in front of this cave was burning a red fire. This was the light she had seen. Beside the fire, muttering to herself, was a strange old woman so old that only a few white hairs covered her head. Her nose was long and hooked, and it almost touched the point of her sharp chin. Her eyes burned like two coals of fire set deep in the tight skin of her face.

This old woman was bending over a blanket of many bright colors which lay at her feet. The daughter of the moon chief knew at once that this was a witch, for she had heard the medicine man of her father's tribe tell how witches looked. But the young girl was not afraid. She had been taught to respect old people. Instead of crying out in fear and running back through the silent forest she spoke to the old woman, calling her by the name of "revered grandmother" and asking whether she could do anything for her.

Being able to read minds, the old witch knew at once that the girl had only good will for her. She asked to be helped to the door of the cave. When the young girl had done this the witch invited her in to see some paintings which she had made on the walls. Without a trace of fear the chief's daughter entered with the toothless, stooped old woman, assisting her by the arm as they walked.

It was a strange sight which met the girl's eyes. All over the roof and the walls were painted signs in colors the girl had never seen before. The old witch read the surprise in the girl's mind and began telling her what each sign meant. The signs told of a far away place called the earth, how it looked and what kind of people lived there. Only a few of the moon's most powerful magicians, who had lived in the white forest, had visited the earth, she told the wondering girl. As she talked a strong desire to visit the earth came over the chief's daughter, and she asked the witch if this could be done.

Yes, it could be done, the old woman said, but only with danger. The girl did not care. She was willing to risk her life. The witch told her that only through a dark passage called "death" could she hope to return to the moon. But the young girl was not afraid.

At last the witch took up the bright blanket and wound it about the girl's shoulders, and as she did this the girl forgot all her life up to that moment. Now the witch drew from her robe an Indian flute made from a bone. She placed it to her dry lips and blew once, then again, then a third time. As the dying note of the flute was fading out in the depths of the cave the still air was suddenly filled with a rushing sound. With the speed of the wind a large eagle sailed into the cave, lit at the feet of the old woman and stood before her with his great wings still outstretched.

This bird, which used to be an evil magician, was the witch's slave. With a wave of her flute she told the eagle to seize the young girl standing beside her in the blanket of sleep and to fly to the earth with her in his strong claws. The eagle obeyed. Out of the cave rushed the bird with the chief's daughter. Up above the white trees he rose, while his great wings roared as they beat the air. Soon they were far above the forest and flying as fast as the lightning towards the distant earth.

When the chief's daughter at last opened her eyes she was lying alone on the shores of an ocean. The eagle and the magic blanket were gone. But she was happy for she knew that she was now on earth. Rising to her feet the girl walked along the ocean listening to the strange sound of the waves and gazing at the flowers she had never seen before. It was not long before she came upon a camp of Indians near the shore. The people could not speak her language, but using the sign language with her fingers she told them that she had come from the moon and wanted to be friends with then. The Indians then took her to their chief. When he learned she was the daughter of a chief on the moon he gave her a fine wigwam of her own and took her into the tribe.

Not many weeks had passed before the chief's son fell in love with this lovely visitor from the moon. Because she fell in love with him they were married. All the tribe was happy, because the people liked them both. The women made the young man and his bride a large new wigwam painted all over with birds and animals and they made the bride some pots and bowls of clay so that she could cook for herself and her husband. The two young people made their home and were happy with each other.

Just before the next spring came the daughter of the moon chief had a dream. She had it the next night, and the next after that. She knew what it meant. She knew that the time had come, as the old witch had told her, for her to go back to her father's home on the moon. When the young wife told her husband he was full of sorrow, but then she told him that soon after her spirit had fled back to the moon he would follow her and they would live forever up in the sky with her father's people. And that made him glad again, and the two lay down together in their home and slept.

When morning came the moon chief's daughter did not open her eyes. Her hands were cold. Her husband bent over her and saw that life had slipped out of her during the night. He uttered a loud cry, for he knew that her dream had come true and that she was gone from him. Finally the people of the tribe came. The women wept and the men were sad and silent. At last they made her ready for burial. They carried her out. They laid her tenderly in the earth and placed beside her cooking pots and blankets for they thought she would need these on the moon.

That night the husband sat near her grave by himself.

The waves of the Gulf made the only sound that broke the stillness. Tired and full of sadness at being parted from his wife for a little while the young husband folded his arms and let his head sink upon them. Suddenly something made him raise his head and look up into the sky. He could see for an instant the misty shape of the one he loved, clad in the long robes in which she had been buried. She seemed to be made of the light that came from the stars. As he watched her she moved her hand and a shower of little stars began to fall towards him. Then he knew that the chief's daughter was on the way to her father on the moon and that she had thrown the stars down to him to let him know that she had not forgotten him.

Full of happiness the young man fell into a deep sleep and did not wake till morning had come to drive the stars from the sky. But morning had not driven them all away. All around his feet on the grass were hundreds of little flowers shaped like stars shining with the fresh dew. Some were white. Others were pink. Some had five pointed petals and some had six, but all had little hearts of gold. These were the stars that the daughter of the moon chief had thrown down to her husband as she left the earth.

Calling to the other Indians the young man pointed to the new flowers and told them how the stars fell during the night. Then they all knew that the girl's dream was true and that she would be waiting in the moon for the day when her husband would go up to live with her. Soon after that the young man was killed in battle. The people of his tribe laid him to rest by the side of his wife, and it was not long before the graves of both were covered with the little pink and white star flowers that can be found on the prairies today. The moon chief's daughter had thrown them down to tell the Indians that her husband had come up to her.

If you use Facebook or Google+ & enjoyed When The Stars Took Root, please tell your friends and let us know to find more like it for you!