There are flowers whose petals have in them part of the very colors belonging to the rainbow. These are the cactus flowers, the blooms which burst out like orange, red or yellow flame from the tips of the thorny cactus plants. It used to be that all these flowers were white, as some are now. But one day the rainbow gave most of them colors which they have kept up to this time. 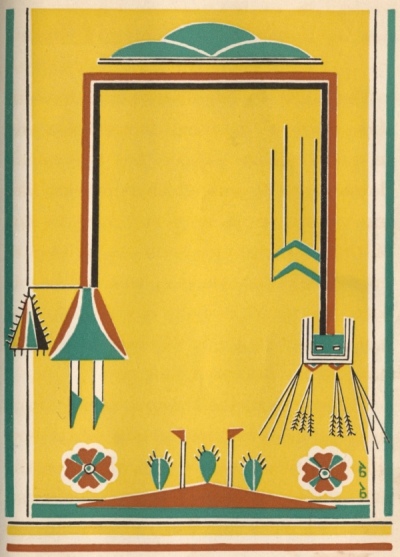 The white cactus flowers used to turn up their faces and look at the bright bow that arched across the sky whenever the sun shone through the rain or mist. The two ends of the rainbow always touched the earth somewhere, and where they touched everything on the ground seemed to be washed in the rainbow's colors. But the rainbow had never touched the cactus plants. Perhaps it was afraid of the sharp thorns that grew on them. The white cactus flowers always hoped that some day they would be bathed in misty colors. Yet the rainbow would never come near them.

Once after a heavy rain the rainbow was up in the sky getting ready to send its two ends down to earth. The rainbow itself was heavy with raindrops. As its ends sank down it took care not to let them fall upon the thorns of the cactus plants. But, just as one of the ends was about to dip to the ground the rainbow suddenly saw a bed of cactus plants hidden in a little cluster of high grass. When it saw the plants the rainbow tried to lift its end again, but the end was so heavy with the raindrops that it kept sinking down, and at last it brushed across the cactus plants with their white flowers.

When this happened the thorns caught at the misty bands of colors to try to keep them for the flowers. The violet, indigo, blue and green bands slipped out of their way, but the yellow, red and orange bands became hung on the thorns. Just as soon as this happened the happy cactus flowers opened their petals wide and began to drink in the colored mists that were clinging to the plants. Before the rainbow had pulled itself loose from the thorns the white flowers had filled themselves with the colors and were now red and orange and yellow themselves.

If you use Facebook or Google+ & enjoyed When The Rainbow Was Torn, please tell your friends and let us know to find more like it for you!