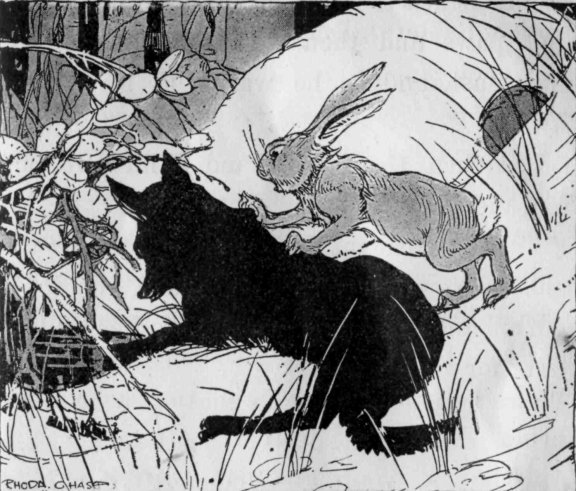 Many hundreds of moons ago, there was a great drought. The streams and lakes were drying up. Water was so scarce that the animals held a council to decide what they should do.

"I hope it will rain soon and fill the streams and lakes," Great Bear said. "If it does not, all the animals will have to go to a land where there is more water."

"I know where there is plenty of water," said Wild Goose.

"If we go to a new country," said Gray Wolf, "we shall have to make new trails."

"And we shall have to clear new land," said Big Beaver, who had to cut down the trees when land was cleared.

All this time the Rabbit said nothing. "Brother Rabbit," Great Bear asked, "what do you think about this matter?"

Brother Rabbit did not answer. His eyes were shut, and he seemed too sleepy to think about anything.

Great Bear asked again, "What do you think about it, Brother Rabbit? Shall we go to the place the ducks and geese have found, where there is plenty of water?"

"Oh," answered Brother Rabbit, "I do not mind the drought. I drink the dew on the grass in the early morning; I do not need to go where there is more water."

And he shut his eyes again.

"Those are wise words, my brother," said Brown Terrapin.

All the others said, "Those are wise words, my brother," and the council was over. The animals were happy because they thought they need not go away from their homes.

Days passed, and still it did not rain. The animals found that the dew did not keep them from suffering from thirst. They were afraid that, after all, they would have to go to another country.

Still the Rabbit looked sleek and fat. He declared that he got all the water he needed from the dew on the grass in the early morning.

After that, the animals came out earlier than before, but they could not get water enough from the morning dew. They did not understand why the Rabbit looked so well.

One day Gray Wolf said to Wild Cat, "Let us watch the Rabbit and see where he gets so much dew that he is never thirsty."

That night they stayed in the woods near Rabbit's wigwam, so as to follow him on the trail. They kept awake all night for fear that they might sleep too late.

Very early in the morning, Brother Rabbit came out of his wigwam and ran swiftly down the hill. Wild Cat and Gray Wolf followed as fast and as quietly as they could.

The dew was on the grass and leaves, but Brother Rabbit did not stop to get it. Instead, he ran down the hill and pushed away a heap of brush. Wild Cat and Gray Wolf hid behind some bushes and watched him.

Brother Rabbit drank from a little spring. Then he filled a jar with clear, fresh water, piled the brush over the spring again, and went up the hill to his wigwam.

Ah! now Gray Wolf and Wild Cat knew why Brother Rabbit did not mind the drought; and they made a plan to punish him for being so selfish.

They got tar and resin from the pine trees, and out of these they made a great wolf. After placing it close to the spring, they hid again in the bushes, to see what would happen.

Early the next morning, Brother Rabbit came running down the hill for more water. He stopped when he saw the tar wolf by his spring.

"What are you doing here, Gray Wolf?" he asked. Of course there was no answer.

"Has my brother no ears?" asked Brother Rabbit.

As the wolf was still silent, Brother Rabbit became angry. "Answer me, Gray Wolf," he cried. But there was no answer.

He slapped the tar wolf with the left front paw. That too, stuck fast.

As Grey Wolf did not let him go, Brother Rabbit kicked the tar wolf, first with one of his hind paws and then with the other. Both stuck fast, and so he was held by all four paws.

Just then Gray Wolf and Wild Cat came from their hiding place.

"We have caught you, Brother Rabbit," they said. "Now we are going to take you to the council and tell how you tried to keep all the water for yourself."

The animals said that Brother Rabbit must be punished, but how they could not decide.

"I am quite willing," Brother Rabbit said, smiling. "Fire is my friend and will not hurt me."

"We might cut off his head," said Brown Terrapin.

"Very well," said the Rabbit, quietly. "Try that. It will not hurt me, for a better head will grow back."

He said he was not afraid of each thing that was mentioned.

"Turn him loose in the brier patch!" cried all the animals.

"Oh, Gray Wolf," he begged, "burn me; cut off my head. Do anything else with me, but please don't throw me in the brier patch."

The more he begged, the faster Gray Wolf hurried to the brier patch. The other animals followed close behind. They were all talking about the tricks Brother Rabbit had played on them and how they had never before been able to get even with him.

When they came to the edge of the brier patch, Brother Rabbit begged harder than ever.

"Good Wolf," he cried, "do anything else with me, but don't throw me in the brier patch!"

He was running so fast that by the time he said this, he was out of sight.

If you use Facebook or Google+ & enjoyed The Tar Wolf, please tell your friends and let us know to find more like it for you!