There was a time when the Indians had never seen a horse. When the first Spanish explorers brought horses with them in their ships to this country the Indians looked with great wonder upon the strangers as they rode, and thought that the horse and the man on its back were one animal. As time passed the Indians learned their mistake, but it was long before they were able to get some of the strange animals for themselves and to find out how to talk to them.

There was once a great blue horse that roamed the western plains. On his back were the tattered remains of what used to be a sky blue silken covering. The Indians of the country around never tried to catch him, but let him roam as he willed. To them this wild, free animal was a visitor from another land, from Spain, from a country which had sent powerful men in steel armor to them. Only one of the Indians had dared to ride the blue horse and he was the bravest of them all. When he died the Indians set the horse free, for there was fire in his eye and lightning in his hoofs.

This is the story of the great wild horse the Indians feared. A young Indian brave saw a Spanish warrior riding the horse through the hills. The Indian was afraid of this tall Spaniard wearing steel armor and riding the horse covered with silk trappings, but he rose from the grass and fired an arrow. The arrow struck the Spaniard through a crack in his armor and the man fell to the ground. His horse stopped and stood over him. Rushing from the grass the young Indian hurried toward the fallen man intending to shoot him again. The horse snorted and pawed the earth and the Indian became frightened and lowered his arrow. How was he to drive the angry horse away? He did not know. None of the Indians knew how to talk the horse language. He shouted. The horse only snorted again and bared his white teeth. The Indian backed away with a look of surprise on his face. 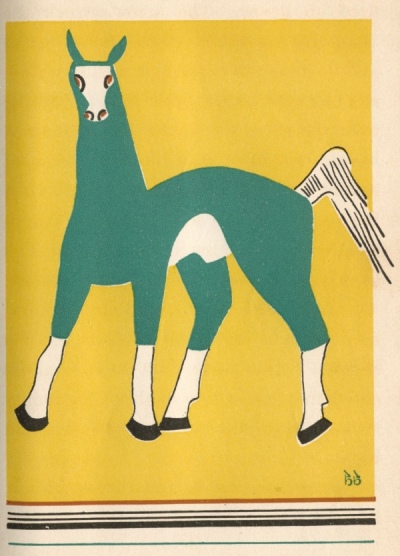 Seeing that the Indian did not know how to talk to the horse, the wounded Spaniard made signs to tell him that if he would spare his life he would teach him the horse language. The Indian nodded and grunted. So it happened that the people of his tribe were surprised to see the young Indian riding into camp that day on the blue horse and holding the wounded Spaniard before him.

Over and over the Spaniard said the words which people use to horses to make them go or stop or run or walk, until the Indian learned how to speak them. At last the Spaniard died of his wound, but not before he had taught the Indian the horse language. Now the young brave was not afraid to ride the animal, but he was afraid to take from the horse the sky blue covering, because he thought it was a magic cloth needed to keep the horse from kicking the babies of the tribe and biting at the Indians' heads.

The great blue horse was fast as the wind. He could skim across the prairies like the cloud shadows, and his flying hoofs beat the ground like the roll of thunder in the summer sky. His master named him The Swift Blue One. The other Indians would not come near him. They did not know the horse language, and they were afraid he might dash them to the ground and slash them with his hoofs.

When at last the master of the horse was killed in battle the Indians decided they would get rid of him by turning him out on the prairie to roam away. They took him from the camp and turned him loose with the silk covering still on his back. And so it happened that for a long time a lonely blue horse roved across the country, sometimes running and stirring up the dust in clouds and always calling out for others of its own kind.

Finally other horses did come. They escaped from their Spanish owners and came to live with this lonely blue horse with the strips of silk covering flying from his back and neck. He became king of them all. The children of these Spanish horses became wild and ran in herds, and many of them were the children of the great blue horse from far away Spain.

If you use Facebook or Google+ & enjoyed The Swift Blue One, please tell your friends and let us know to find more like it for you!