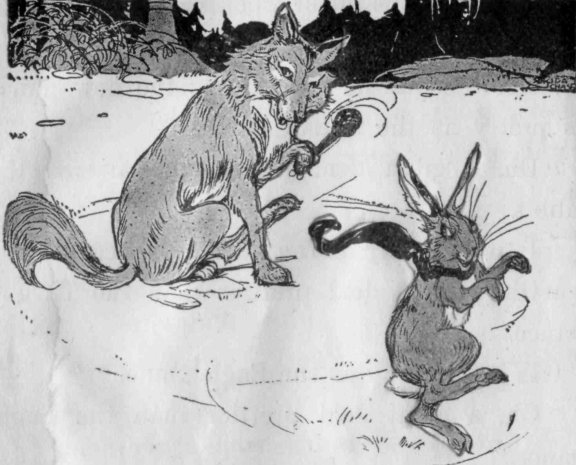 One day he caught the rabbit coming through a field.

"Now," said the wolf, "I am going to pay you for all the tricks you have played on me. I will cut off your ears and use them for spoons to stir my hominy pot. As soon as I sharpen this stone, off your ears go!"

While the wolf sharpened the stone, he sang in his harsh voice a song somewhat like this:

the rabbit could almost feel the sharp stone cutting his ears. But he was a brave little rabbit and said nothing.

At last the wolf stopped singing for a moment.

Then the rabbit said, "Brother Wolf, I know a new dance. Don't you wish me to teach it to you?"

"Yes, when I have cut off your ears," said the wolf.

Then he went on singing,

"After my ears are cut off," said the rabbit, "I can never dance any more."

Now the wolf knew that the rabbit could sing and dance better than any other animal, and he wished very much to learn the new dance. He went on sharpening the stone, but he did not sing while he worked.

After a while he asked, "Is the new dance as pretty as the Snake Dance?"

"Is it as pretty as the Turkey Dance?"

"Oh, a great deal prettier than the Turkey Dance."

"Is it as pretty as the Eagle Dance?"

"Oh, a great deal prettier than the Eagle Dance."

The wolf asked if the new dance was as pretty as other dances he had seen, and the rabbit said that it was much prettier.

This pleased the wolf, as he wished to have a new dance for the green corn festival.

"You may teach me the dance now," he said. "I can cut off your ears afterward."

"Very well," said the rabbit; "pat your foot to keep time, and watch me while I dance."

So the wolf stood in the middle of the field, patting his foot and shaking a rattle while the rabbit danced around him and sang,

Then the rabbit made a ring in the middle of the field. He said to the wolf, "Now, you dance around this ring, and sing just as I do."

He made a larger ring for himself and danced around just beyond the wolf. The wolf thought that this was the finest dance he had ever seen. He and the rabbit danced faster and faster, and sang louder and louder.

As the rabbit danced, he moved nearer and nearer to the edge of the field. The wolf was dancing so fast and singing so loud that he did not notice this.

The rabbit kept on singing,

At last, Brother Rabbit reached the edge of the field; then he jumped into the blackberry bushes and ran away. The wolf tried to give chase, but he was so dizzy that he could not run. And the rabbit got away without having his ears cut off.

If you use Facebook or Google+ & enjoyed The Rabbit And The Wolf, please tell your friends and let us know to find more like it for you!