Where did the big and ugly fishes and the snakes that swim in the water come from? The Indians know. From their forefathers comes this story.

A long time ago, before the Great Father had finished putting all the kinds of fish into the rivers and shady streams, there was an Indian woman who was blessed with twins. This Indian woman was a very proud mother, for her two little brown, black-eyed babies were good. to look at, and they had good tempers, and because of it other women of the tribe also wished they might have twin babies.

It was in the spring time, and the little twins were about four years old when they began to tire of staying in their mother's wigwam. Their mother, one day, had gone with the other women of the tribe to pick wild berries that grow in the woods and around the brier patches. Some of these berries the Indians ate as soon as they picked them, but others they dried and stored to eat in winter, when a blanket of frost covered the field and woods and few birds and beasts could be found.

The mother had left the little children with their grandmother. This old woman was wrinkled and weak, and sleep comes easily to such people whose eyes are made heavy and tired with the weight of many years of hard work and troubles. Lying down on a deer skin inside the wigwam the grandmother began to watch the twins as they played near at hand just outside the door. The day was warm.

Even the locusts in the tree tops sang lazy, sleepy songs, and the breeze that moved the leafy limbs of the trees whispered softly. The old grandmother began to nod. Her head sank upon her arm. Without knowing it she fell asleep in the wigwam.

When the twins saw their grandmother was asleep they put their heads together and whispered. Here was a fine chance to slip off and do something they had wanted to do for a long time. It was to do something that they had watched grown-up Indians do in the bayou that ran along the edge of the camp. The Indians waded in the bayou near its banks and bent down in the shallow water to dig up with their hands the tender roots of the plants called "Yonkupins" whose broad green leaves lift well above the surface of the bayou. These roots were good to eat. The little twins had seen the Indians gathering them and they wanted to gather them too.

Now their mother was away and their grandmother was asleep and they had a chance to do it. Without a word they slipped away from the wigwam when nobody was looking, and they ran without making a noise with their little buck-skin moccasins along a grassy path that led towards the bayou. 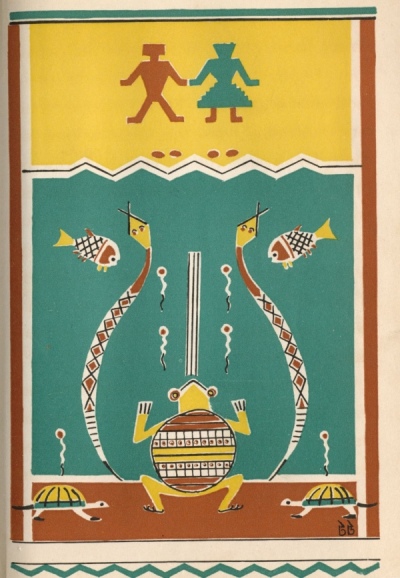 And now they were standing on the brink of a shallow place where a tongue of the bayou ran back into a low place in the banks. Everything was still among the high reeds that grew on the banks and leaned over the water. The twins looked down. They could see the bottom and weeds growing on it. What was in the weeds? They had been told by their mother that evil spirits were there, for she wanted to frighten them so they would not want to go near the bayou and be drowned. But they saw nothing, and they waded in, hand in hand.

They saw the broad green pads or leaves of lily plants floating a little way from the bank, and they knew that the roots were underneath, growing in the soft mud. Carefully they waded towards them. The water rose up to their knees. They were not afraid because they had not found the evil spirits their mother had told them about. They waded farther. The water was up to their waists. Now they were among the lily pads, and the long stems of the plants slipped against their brown bodies and tickled them. Here was the place to feel around in the bottom for the roots. The little boy and girl bent over and stretched their short arms down into the water around their feet. They had to bend until their chins were in the water and all their bodies but their heads were beneath the surface, but still they were not afraid, because even yet they had not seen the evil spirits their mother told them were there. It was so nice to be feeling with their fingers in the cool mud. The weeds growing on the bottom tickled their toes, and the leaves of the lily plants rubbed against their faces.

But just then, when everything seemed so easy and beautiful something happened. In pulling at a root one of the twins suddenly slipped and fell. Her head went under water. Then she became frightened, and with a scared cry she caught at her brother and pulled him down too. The evil spirits seemed to have them now. The lily stems wound around their bodies as they struggled. The warm water filled their open mouths as they tried to call their mother. They tried to get out of the clinging lily stems but they only slipped into deeper water and became wrapped tighter with the stems that were like ropes. They could not call for help for their mouths were filling with water. They could not get back to the bank for their heads were under water and they could not reach the bottom any more. The bright sun faded out swiftly, the songs of the birds were heard no more, the muddy water blinded their eyes and everything became dark. Poor little Indian twins! The evil water spirits they could not see had trapped them.

After a while the Indians came and found the children lying in each other's arms in the shallow water. They could not hear their poor mother wailing, nor could they hear their old grandmother moaning, and swinging to and fro in her sorrow. They could not see their father as he stood tall and still looking down at them on the bank while he sternly kept the grief of a father's heart from showing in a warrior's face.

That night, while the mother was sitting beside her twins for the last time, watching over their bodies before they were buried with their toys in the earth, she asked the Great Spirit to grant her a wish. For the sake of the other babies of the tribe she asked that the evil spirits of the water be given shapes that could be seen, so that the other babies would see them in the water and be frightened away from them.

The Great Spirit granted the wish of this unselfish mother. He gave to those evil spirits the shapes that all men fear, the shapes of the alligator, the big snapping turtle, the gar fish with his rows of wicked teeth, and the snake known as the water moccasin. From that time the little Indian boys and girls could see those evil spirits and keep away from them.

If you use Facebook or Google+ & enjoyed The Evil Water Spirits, please tell your friends and let us know to find more like it for you!