When April comes to stir the forests and fields into new life after the winter months have gone, the cottonwood tree spreads her arms and shakes her head and sends her white feathers floating down in the air. The cottonwood does this every year because she remembers something that happened long ago before the owl became a wicked bird who eats others.

In the beginning of things no bird killed another. All ate buds and leaves and grasses. The Great Spirit who made them, caused the birds to eat these things because he did not like to see anything that he had made killed by another creature.

The owl, at that long distant time, was not blind in the daylight, like he is now. He flew around with the other birds and fell in love with a white swan. She could swim. She liked to float on the waters of the river and to gaze at herself in the smooth water. But the owl was not made for swimming. He sat in a tree above the swan and wished he could be with her.

"Marry me, lovely swan," called out the owl one day as he watched her.

The white swan looked up at him and said, "Come down and we shall talk about it." 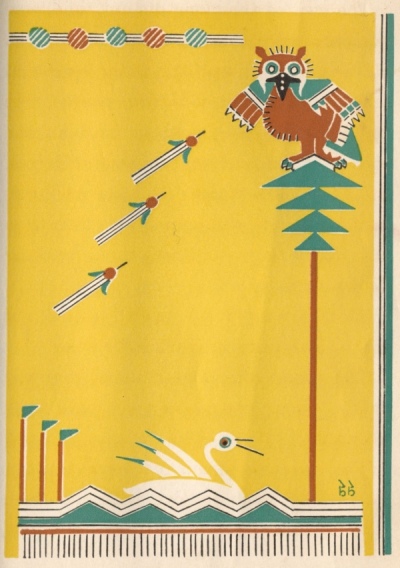 The owl was afraid of the water, but he was so much in love with the swan that he decided he would try it. So down, down he sailed from the limb. He struck the river with a splash. He tried to swim but he could not. He fluttered his wings and stirred up the water and scared the fish, but he could not swim. With his mouth full of water the owl at last rose from the river and flew up to the branch again. There he sat, dripping water and saying bad words.

"Ha, ha, ha!" came a laugh from the reeds along the river. The loon, a bird that swims under the water, had seen the owl try to swim and was laughing at him from behind the reeds. "Ha, ha, ha!" laughed the long-necked loon again. "The oldest fools are the biggest fools."

That made the wet owl angry. "Who, who, who?" he called out. He was full of rage, and his hooked beak snapped.

On the branch of the cottonwood tree on which the owl was sitting a wood pigeon was talking to her mate. The wood pigeons didn't know anything about the owl for they were busy talking. The husband asked, "Whom do you love?" Just as the owl cried out, "Who, who, who?" the pigeon's mate said to her husband, "You, you."

When the angry owl heard this he thought the pigeon was talking to him. Down he darted in a fury towards the limb on which the pigeons were sitting, and he struck the little pigeon with his strong claws and his heavy beak. He knocked some fluffy feathers from the poor pigeon as he caught her. The feathers floated down and brushed the cheek of the Great Spirit as he was walking by under the trees.

"What is this?" cried the Great Spirit. "Some bird is killed." He looked up at the cottonwood and saw the owl sitting on a limb with the little pigeon in one of his cruel claws.

"What has happened?" called out the Great Spirit.

The owl would not answer, but the loon laughed again and told about the owl and the swan and the pigeons.

Full of rage the Great Spirit decided to punish the owl. He waved his hand and the owl became blind when the sun was shining and the other birds were flying around. And so it happened that from that time the owl could not see except at night, when the other birds were hidden away from his cruel claws and beak. Now the owl flies only at night. He keeps calling "Who, who?" but nobody answers. The Great Spirit also punished the loon for laughing. He made the loon swim by himself on the rivers at night and laugh when the owl calls out.

The cottonwood tree remembers what happened that April day. Because she remembers how the little gray feathers of the pigeon floated down she always shakes out her own down. When the winds blew this through the forest and over the rivers the Indians used to say, "The spirit of the pigeon has come back to her husband."

If you use Facebook or Google+ & enjoyed The Cottonwood Remembers, please tell your friends and let us know to find more like it for you!