For many days a tribe of Indians had suffered from a drought that threatened never to end. The grass dried up. Berry bushes turned yellow and died as the hot sun kept burning down through the cloudless sky. The creeks ran dry and the fish died. Animals fled from the country because there was no more water to be found. Finally the Indians moved their camp and hunted for water, but nowhere could they find enough. Something had to be done. The chief of the tribe called on the medicine man to tell them what they could do to break the drought and to bring down the rain once more.

Pointing to a high cliff the medicine man told the chief that a great serpent, the chief of all the snakes, had his den in a cave at the foot of the cliff. This serpent, said the medicine man, would have to be fed some of the maidens of the tribe. Then the gods would send down the rain. 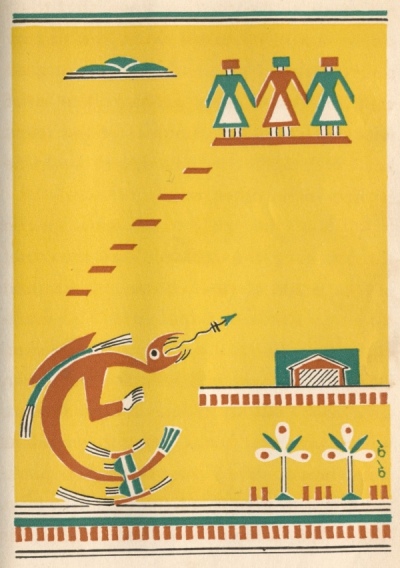 As soon as they learned what the medicine man had said the young girls hurried to the chief and begged him to let them be thrown over the cliff to the chief of the snakes, so that their people could have the water they needed. All Indians were taught to be willing to give up their lives, if need be, for the sake of the tribe. Because they had been taught this the young Indian girls were not afraid to die, for they knew that their spirits would be taken up in the sky by their ancestors and honored for the good they had done their people. The chief was sad to lose the maidens of the tribe, but he thought the long drought could be broken in no other way.

At last the girls who were to be thrown over the cliff to feed the chief of the snakes were chosen by lot and taken to the top of the cliff. The medicine man lined them up at the edge. They looked over and became dizzy when they saw how far it was to the bottom, where lay cruel rocks. But the maidens were brave. They waited for the medicine man to give them the signal to leap. When the medicine man had finished his dance and his prayers he raised his hand. Hand in hand the maidens jumped. Down, down, down they fell, their white robes fluttering. The parents of the girls turned their faces away, for they could not bear to see their daughters die.

But the brave Indian girls never died. They never dashed on the rocks. The goddess who watched over young girls was looking down from the sky and took pity on the maidens. Just before they reached the bottom of the cliff she turned them into white flowering bushes which took root on the spot. As the snake chief, who had been looking up and waiting with an open mouth for the maidens, saw this happen he was afraid, for he knew that some power greater than himself had been at work. He hurried back into his dark cave. As soon as he had gone the clouds which had been afraid to float over the land as long as the serpent was there now sailed back. Rain poured down from them and the long drought was ended.

The bushes which had been the Indian maidens continued to grow and to spread in memory of the brave deed of long ago. We call these the bee brush or bush honeysuckle. They still grow in the canyons or gulches, all over central Texas and southward to the Rio Grande river. All summer they bloom and fill the air with fragrance. In the spring the plants are sought by hungry hummingbirds who sometimes nest in them. The bees come to gather honey from the flowers. Butterflies and moths hover over them. Perhaps these creatures know the story of the sweet-smelling bush.

If you use Facebook or Google+ & enjoyed Maidens Who Broke A Drought, please tell your friends and let us know to find more like it for you!