A great hunter named Two Hawks stood on a dry, hot plain at the edge of his camp and looked far away across the dying bushes. Two Hawks was looking for signs of wild animals which the hungry Indians of his tribe could eat. But he could see none, he could see nothing but shining waves of heat, called sun devils, dancing over the desert. All the animals had gone because for many weeks there had been no rain in the land. Everything was dry, the creeks had dried up, the springs had dried up. Because there was no water the plants were dying, and because the plants were dying, the animals such as rabbits, the deer and the buffaloes, had fled away in search of food and water.

Day after day the sun burned in the hard blue sky. Now Two Hawks' tribe had become so weak from want of food that of all the men only Two Hawks himself, who was the strongest of them all, could walk around. The chief was looking across the land because he knew that he must soon leave the camp alone to see if he could find something for his people to eat. Far off he could see a mountain. He decided he would go toward that mountain to see what he could find.

Two Hawks was strong and brave, but as he walked over the burning ground where no grass grew he felt sick and weak. The sun beat upon his head and made him dizzy, but he walked mile after mile without stopping. Finally, after two days, Two Hawks came in sight of a deep canyon near the mountain. Tired and thirsty, the chief looked over the edge of the canyon. There, feeding on the grass that grew near the edge of a little stream at the bottom, was a herd of buffalo. Two Hawks' heart leaped with joy when he saw the animals. Although he was weak from hunger the Indian began creeping down the side of the canyon through the bushes. When he was close enough to the buffaloes he put an arrow to his bow, but he was so weak that he could hardly bend the bow. Finally he let the arrow fly. His aim was good, and one of the buffaloes kicked up a mighty cloud of dust and then fell to the ground.

Now there was food for the Indians! But when Two Hawks had skinned the dead buffalo and started to carry off some of the meat he found he did not have enough strength to carry it. What could he do? At last he decided to hide the meat in a little cave he saw in the side of the canyon. He would go back to the camp and return with some of the men. 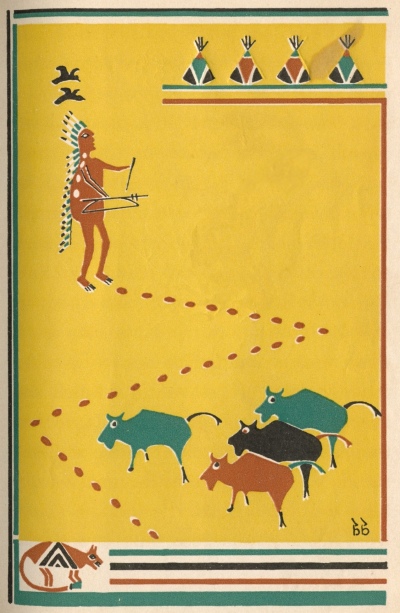 As Two Hawks was putting the last of the meat into the cave, a large, fierce wolf which had smelled the meat rushed into the cave. Two Hawks did not see him, for he was bending over the meat. The wolf struck him on the back and sank his sharp teeth into the chief's neck.

With the last of his strength Two Hawks turned and began fighting the terrible animal with his bare hands. Finally he tore the wolf's teeth from his neck. As he did so the blood flowed out and streamed into his face, but Two Hawks did not care. He was going to kill this wolf. He seized the animal's neck in his still strong hands and choked it until the wolf lay still.

Two Hawks had won the battle. Yet when he got to his feet he almost fell down, for he had lost much blood. But nothing would stop him from getting back to his camp far over the plains. He must tell his people where they could find the meat. He staggered out of the cave and at last crawled back to the top of the canyon.

As Two Hawks went slowly back the deep cuts in his neck which the wolf had made still bled. The blood ran down his body and fell in drops to the hard, baked ground. As he went he became weaker and weaker. Finally he knew he was going to die before he could return to the Indians. He was glad that the drops of blood marked his trail, for he knew that if the Indians found his body they could follow the blood back to the cave where he had left the meat. But then Two Hawks saw that large red ants had begun to follow him and were eating the drops as fast as they fell.

When he saw this Two Hawks fell upon his knees and prayed to the Great Spirit to do something to keep the ants from eating the signs that marked his trail. He prayed for a long time under the hot sun, then got to his feet and tried to go on. When he had come close to the camp he fell to the earth and died.

The Great Spirit was proud of the chief's bravery. Because Two Hawks had done his best to help his people the Great Spirit leaned down from the sky and rolled a little ball of earth around each drop of blood, so that the big ants could not eat it. And so it happened that all along the trail of Two Hawks were little brown balls of earth. A party of Indians which had gone out to find their chief soon found his body. As they sadly picked him up they saw all around him the little balls. They saw them on the ground where the chief had walked. When the Indians broke open one of the balls they found the red blood inside, and then they knew that the Great Spirit had done this as a message to them. After they had taken the body of Two Hawks to camp they went back and followed the trail until they came to the cave and found the meat which Two Hawks had hidden for them.

When they brought the meat back to camp the Indians were so happy they wanted the spirit of Two Hawks to know how much they thanked him. They decided to gather the little balls and place them on his grave. But when they looked they could not find them. Something had happened to them.

It was not long after that until the rains came. When the dry earth had become moist once more, so that plants could grow in it, a new kind of bush appeared along the old trail of Two Hawks. It had small, thick, green leaves and sweet flowers that were purple-blue in color. As the flowers dried up the bush became covered with green pods that became hard, earth-colored balls, just like those little balls that covered the blood of Two Hawks. And inside each ball was a red seed, like the red blood of Two Hawks.

Today the seeds, which children make into bright red necklaces, are called frijolitos.

If you use Facebook or Google+ & enjoyed Chief Two Hawks' Trail, please tell your friends and let us know to find more like it for you!