If you will look at any one of our native orchids, of which we have about a dozen kinds, you will see that this flower has the shape of an Indian moccasin. Why do the orchids have this shape? It is because a long time ago they used to be the shoes of an Indian tribe.

In the early years of Indian history there was a large island somewhere out in the Gulf of Mexico. On this island lived a tribe of Indians. They were very wise, and because they were wise they made happy homes for themselves. They did not spend their time and throw away their lives fighting. Instead, they lived in peace, learned how to make fine vases, pots and bowls out of the red clay they found on the island. They built homes out of cane that grew around the edges of the island. And they liked to paint their clothes with the bright paints they made out of berries. They even painted their leather moccasins blue and yellow and red and white.

This tribe of Indians was happy until one night the top of the huge mountain that rose in the center of the island burst open with a loud noise and filled the sky with red flames. Great stones flew out of the hole on top of the mountain and rained down on the Indians' homes and gardens. Steam shot up from the mountain with the sound of thunder, and red hot, melted rock began running down the side of the mountain and burning everything it touched. Everywhere the Indians were rushing from their homes and crying in fear. Fathers lost their families. Mothers lost their children. Many of the people were hurt by the rocks thrown out of the thundering mountain. Soon the melted rock, called lava, began to flow into the village, and then the homes of the Indians burst into flames.

The chief of the tribe saw that they could stay on the island no longer, for everything was being burned. He led his people down to where they kept their canoes and ordered them to get in and paddle towards the nearest land, which is now the Gulf coast of Texas. It was a fortunate thing that the poor people left the island when they did. They were hardly a mile out in the water when all at once the whole island shook with a great noise which seemed to split the sky. Then with a roar the water surrounding the place where they had lived rushed over what was left of the island, and not a tree or a hill was seen any more. While the women and children of the homeless tribe wept in sorrow the men bent their strong backs and paddled towards the distant land somewhere in the mists that lay over the water. 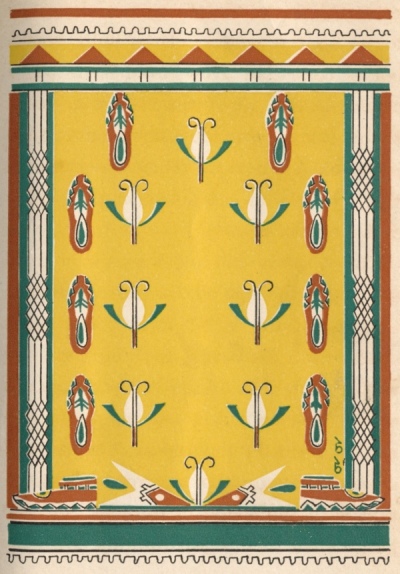 A few days later the wandering tribe had pitched its camp on the beach from which they had been able to see their island far away. But they could see nothing now. The island was gone. All that remained of their homes were some bits of wood that floated onto the shore. The women began to weep. Then the medicine man of the tribe, who had been making wonderful medicine so that he could talk with the spirits, quieted them and told them that some day the island would come up out of the water again and they could go home.

But that would not be for a long time. The tribe had to move farther towards the north and away from the beach in order to find food, so the Indians broke camp, burned their canoes as an offering to the Great Spirit and began to wander away from the shore. As they passed out of sight of the Gulf they began leaving along the trail their painted moccasins so that they would know where to come to find their island again. The medicine man put a spell upon these moccasins to keep them from being moved, and he turned each one so that its toe pointed towards the spot where the island had been.

Months went by, then the years began to pass. Still the tribe kept going. The older people began to die. Soon the old chief began to fear that only the young Indians would be left and they would not know how to get back to the island when it was time for it to come up out of the gulf again. He went to the medicine man's wigwam and asked him what he should do. Without answering the wise old medicine man took the chief back on their trail to where the tribe had dropped the last painted moccasin.

If you go out in the woods and find an orchid growing on the edge of a swamp you will see the little flower pointing south. And you will know why.

If you use Facebook or Google+ & enjoyed A Tribe That Left Its Shoes, please tell your friends and let us know to find more like it for you!