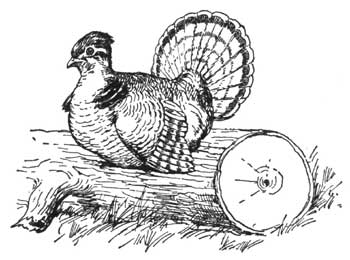 So the Evil Spirit went to work. In a short time he had made a big bird, that could not sing, but could drum.

The big bird flew away into the wood. That night a drumming noise was heard in the wood. The people were afraid. They could not sleep, because of the noise.

In the morning, they went into the woods to search for the noise. Deep in the forest could still be heard that strange drumming. They followed it, until they came to a deep, dark place in the woods. There was a loud fluttering and whirring of wings, and a great bird flew out from among them, along the ground and over the trees.

The people were afraid. They called to the Great Spirit to help them.

The Great Spirit was near. He heard their cry, and went after the bird, for he was very angry.

The Great Spirit said, "I will not have my people frightened by this great bird; it shall die."

As the big bird struck the tree, drops of blood flew in all directions. They changed into smaller birds that went whirring into the woods, just as the big bird had done. There they began to drum.

Like the big bird, these smaller birds like to startle people. They flutter out from under the leaves, and with a whirring noise they fly far into the wood. There they perch on an old log, or a rock, and drum with their wings.

Some of the earth people say they are drumming for their mates. But others still think that the birds drum to make people afraid.

So this is how the Indians say the partridges came to be. This is why they drum, and why some of the earth children still love to hunt partridges.

If you use Facebook or Google+ & enjoyed Why The Partridge Drums, please tell your friends and let us know to find more like it for you!