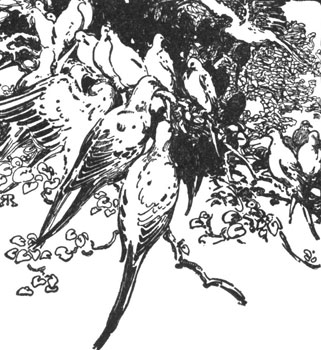 An Indian hunter went into the forest in search of game.

The forest was so large that it would have taken three days to journey through it. All day he followed the track of the deer, but his arrows brought him no food.

At night, he came to a dark, swift-running stream. He was tired and hungry.

"Here," said he, "I will lie down and rest until sunrise."

He began to search for a bed of pine needles, for the Indian loves the pine tree. It is his friend by day and by night. By day it is his forest guide. At night it gives him a soft, sweet-smelling bed on which to sleep, and it shields him from the storm.

The hunter ran along the stream. It was very dark. He felt no soft pine needles under his moccasined feet, only the knotted roots of trees.

Suddenly the great roots of an oak tree reached out and caught him. He could not free his foot from the oak's grasp.

The sun rose and set. The great tree still held the hunter fast. He was weak from pain and hunger.

It was now two days since he had tasted food. Four notches had been cut in his stick, for the Indian measures time in this way. Each sunrise and sunset, when he is on the trail, is marked by a notch on a small stick which he carries.

Three times did the sun again rise and set, yet the tree did not let go its hold. There were now ten notches on the stick, and the hunter was so weak that he could scarcely cut the last one.

As the sun rose on the fifth day, a bird flew into the tree. He saw the hunter lying on the ground, and came close and spoke to him.

The hunter understood, for in those days men and birds could talk together.

The bird asked the man what he could do for him, and the hunter whispered, "You are strong. You can fly a long trail. Go and tell the chief of my people."

The bird flew swiftly away with the message. He did not wait until the sun was high. He did not stop to eat one berry or one worm. He did not fly high, nor fly low to talk with other birds. He went straight to the people the hunter had told him of.

The West Wind tried to blow him back. A black cloud came up to frighten him, but he went through it. On, and on, and on, he went. Straight to the wigwam of the chief, he carried his message.

The chief had called together the young men who were fleet of foot, and was about to send them forth to find the lost hunter. They were asking the chief what trails they had best take. Before the chief could reply, a beautiful dove-colored bird had flown close to his ear and had spoken to him in soft, low tones.

The chief told the young men what the bird had said, and they set off on the trail the bird had named. Before sunset, they had found the lost hunter.

Carefully they freed him from the grasp of the great oak and bore him to his people. That night there was a feast and a dance in his honor.

Ever since, the Indians have loved the birds that carry the messages, and they never shoot a pigeon.

If you use Facebook or Google+ & enjoyed Why Indians Never Shoot Pigeons, please tell your friends and let us know to find more like it for you!