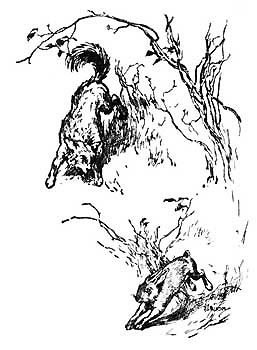 A hound was chasing a hare through the woods.

Some wolves and panthers were chasing a bull that had been feeding in the valley near the woods. For some time they had been trying to run him down, but they did not seem to gain on him.

When the wolves and panthers saw that they were not gaining on the bull, they halted to take counsel. They decided that it would take a whole day of hard running to get the bull, and a hound was near! Why not go for the hound?

All agreed. They set off for the hound.

Now the bull had heard the wolves and panthers take council, and he, too, set off for the woods.

As he neared the wood, the bull called to the hound and warned him that a pack of wolves and panthers was after him. Just then they came into sight. The hound dared not meet them alone, and he knew not which way to turn.

Then the bull called, "Come, jump on my back. I can outrun them."

The hound ran and leaped on the back of the bull, and away they went.

The bull and the hound talked as they ran. The bull said he thought the wolves would soon grow tired, fall back, and give up the chase. But he was wrong. They were too angry at being outwitted.

"You think to take our game from us," they howled at the bull. "But we will eat hound meat to-night."

The bull saw it was a run for life. All day he ran. For a time it was easy to outrun the wolves and panthers, but at last they began to press hard upon him.

As the sun dropped out of the sky, the bull felt his knees begin to weaken. The weight of the hound was telling on him. A moment later, he stumbled and fell.

In an instant, the pack was upon them. But with one leap, the hound cleared the pack and was off down the trail.

The weaker wolves and panthers leaped upon the bull. The stronger went on.

But now the best of them were no match for the hound. He was fresh and strong, for he had been riding all day. They were tired and worn from the long chase, and soon they gave it up.

Because the hound is able to save his strength for the end of the chase, he can now outrun not only wolves and panthers, but all the other animals.

If you use Facebook or Google+ & enjoyed Why Hounds Outrun Other Animals, please tell your friends and let us know to find more like it for you!