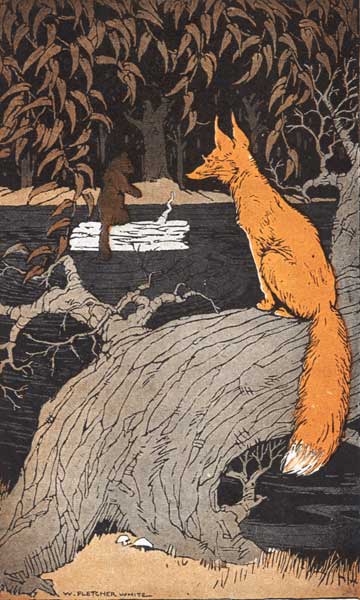 A fox was running through the wood near a river. He had a fish in his mouth.

The fish had been stolen from an Indian who lived down the stream. The fox had been passing near the Indian's wigwam. He saw the fish hanging by the fire. It was cleaned and ready to cook.

"What a tasty breakfast!" thought the fox. "I think I will watch the man eat."

Soon the Indian went into the wigwam. The fox slipped up to the fire. He seized the fish, and ran away with it.

When the Indian came back, he had no breakfast. The fish was gone. No fox was to be seen.

The fox ran along, feeling much pleased with himself.

"What a cunning fox I am," he chuckled. "I will play another foxy trick. This time it shall be on the bear I see coming."

He ran up a tree that had been bent half way to earth by the West Wind. There he began to eat his fish. He smacked his lips so loudly that the bear heard him.

The bear stopped under the tree, and asked, "What are you eating that tastes so good?"

For answer the fox threw down a bit of the fish. The bear smacked his lips and cried, "More! More!"

"Go to the river, swim out to the big log, and catch your own fish," called the fox. "It's very easy! Just drop your tail into the water. Hold it there till a fish comes along and bites, then pull it up. That is the way I catch my fish. You can catch all the fish you want with your own tail."

The bear hurried on to the river. He swam to the log and dropped his tail into the water, as the fox had advised.

All day he sat and fished with his tail,-for bears then had very long tails.

The sun set, but no fish had pulled his tail. All night the bear sat on the log and fished. Cold North Wind blew his breath over the water. The river grew still and white.

Towards morning, the bear felt that his tail was getting very heavy. Now at last he was sure he had a fish. He tried to pull it up. But alas! his tail was frozen fast in the ice.

Then the fox came along. He laughed long and loudly at the bear, and asked if the fishing was good.

Some dogs heard the fox, and came tearing through the thick underbrush. They saw the fox and started after him.

The fox slyly led them on to the frozen river toward the bear. The bear saw them coming, and called to the fox to go around some other way. The fox made believe he did not hear, and came straight on to the bear to ask him what he had said.

The dogs leaped upon the bear. The bear struggled. He gave one great pull, and freed himself from the ice. He struck at the dogs so fiercely with his great paws, that they soon left him, and went on after the fox.

Dogs have been running after foxes ever since.

When the bear got his breath, he stood up and looked around at his tail. He found he had only a small piece left. Most of his tail had been left in the ice.

This is why bears have short tails, and why dogs still love to chase the fox.

If you use Facebook or Google+ & enjoyed Why Dogs Chase Foxes, please tell your friends and let us know to find more like it for you!