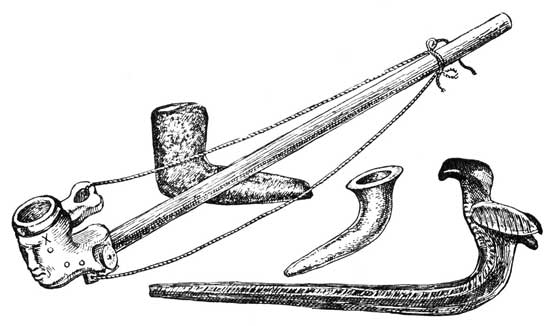 The land was lean and hungry. The Old Man of the North Lodge had breathed upon the valley. His breath had frozen the corn, and there was no bread for the people.

The Indian hunters took to the chase. They followed every track of deer or rabbit. If their arrows brought them meat, they threw it over their shoulders and ran to the village, that the hungry women and children might eat.

But one Indian remained in his wigwam. He sat by the fire with his wife and child, and waited for the hunters to bring game.

This man refused to go on the hunt. He was lazy. All day he sat by the fire and smoked his pipe. Once in a while, he would stir the water in the kettle which he kept boiling for the meat that he hoped the hunters might bring. Whenever the child, his little son, begged him for food, he would say, "It isn't done yet."

At last the little Indian boy grew so sick and faint for want of food that he cried aloud.

The lazy Indian father was angry. He seized the pudding stick, and struck the child to the ground. Instantly a bird flew up and perched on the pole over the fire, from which the kettle hung.

"Now it's done!" said the bird solemnly, for it did not seem to have a light heart like other birds.

Now, strange as it may seem this father was no longer cruel and lazy. His lazy spirit seemed to have gone. He wanted to go at once on the chase, and hunt food for his wife and little boy.

"To-night you shall have deer meat to eat," he said, as he spread a soft skin by the fire, for the boy to lie on. Then he turned to place the child on the skin,-but no boy was there. He had no son. Only that strange bird perched, joyless and alone, over the fire, on the pole from which the kettle hung.

"Now it's done!" the bird cried again, and with that it flew out of the wigwam. 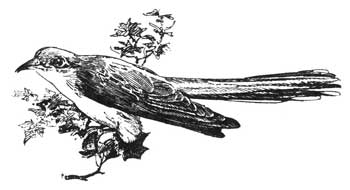 That spring the Indians discovered a new bird in the woods. The bird was too lazy to build a real nest.

This bird did not weave together twigs and moss, leaves and ferns, bits of hair and thistledown, to make a cozy, warm, safe nest for its eggs and young, as did the other birds. This bird would lay its eggs anywhere. Wherever a few sticks lay crosswise in a track, or in a little hollow of the ground, or where some twigs or dried ferns were caught loosely in a bush, there this lazy bird would lay its eggs and rear its young.

It was too lazy to build a real nest, that was safe and warm for its little ones.

The Indians called the bird "the cuckoo." But only one Indian knew how the cuckoo came to be, and why it is too lazy to build a real nest.

If you use Facebook or Google+ & enjoyed Why The Cuckoo Is So Lazy, please tell your friends and let us know to find more like it for you!