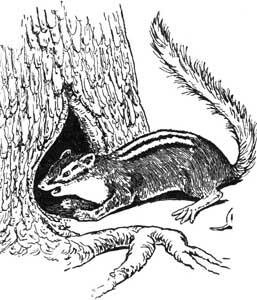 At one time, the animals had tribes and chiefs, like men. It was when the porcupine was chief, that a council was called.

A great fire was lighted, for it was night. When all the animals were seated around the fire, the porcupine spoke.

"Friends," he said, "we have met here to settle a great question: 'Shall we have night all the time, or day?'" At this, all the animals began to talk at once. There was great confusion. The night animals kept shouting, "Night, night! Always night!" Others of the animals cried, "Day, day! Always day!" Still others called for "Day and night!"

There was so much noise that it could not be decided what was best.

At last the animals grew tired of calling. One by one the voices grew fainter, and the shouting ceased. Of the night animals, the voice of the bear alone was heard. He had a big voice and still kept calling, "Night, night! Always night!"

Then the bear, too, became tired. He was fat and lazy, and so sleepy! He thought he would take a short nap.

And before the animals knew it, the sun began to rise.

At the first rays of light, the bear sat up, blinked, and rubbed his eyes. He saw that while he had slept, light had indeed come. He knew that he and the night animals had been beaten in the council, and that the chipmunk and the animals who wanted day and night had won.

The chipmunk laughed and sprang into a hole of a hollow tree near by. But those black stripes on the chipmunk's back show where the paw of the black bear touched him as he slipped into the tree.

Ever since this council, and the little chipmunk called so long and loud for "light and night," we have had day and night.

If you use Facebook or Google+ & enjoyed Why The Chipmunk Has Black Stripes, please tell your friends and let us know to find more like it for you!