Long ago, birds, trees, animals, and men knew each the language of the other, and all could talk together.

In those days, the trees of the forest grew very large and strong. At last they came to know their strength too well. They became selfish, and proud, and quarrelsome. Each tree boasted that he was the greatest and strongest. Each one struggled to gain for himself the most earth, the best air, the brightest sun. No tree had a thought for the other.

One day the trunk of a great Maple tried to crowd out an Ash. The Ash, of course, thought he had as much right to stand there as the Maple, and he said he would not stir a limb.

"Get out of my way," cried the Maple. "I am greater than you, and of more use to man; for I furnish the sweet water for him to drink."

"Indeed, I will not!" said the Ash. "I am greater than you, and of more use to man than you; for I furnish the tough wood from which he makes his bow."

At this the trees fell to wrestling. Back and forth, in and out they swayed, each trying to throw the other. They forgot that they were brothers in the wood.

Then the South Wind came along. He heard the loud voices and stopped to find out what the quarrel was about.

"I am greater than you, for I furnish the sweet water for man to drink," came the angry voice of the Maple, as he threw his huge trunk against the Ash.

"No, you are not," retorted the Ash, and he sent the Maple back with a great push of his strong elbow. "I am greater than you, for I furnish the tough wood from which he makes his bow."

For a time, the South Wind watched them writhe and twist and try to throw each other to the ground. Then he said, softly, "You, O Maple, do not cause the sweet water to flow for man; nor do you, O Ash, make your wood to grow pliant and tough for his bow."

"Who does, then?" they asked defiantly.

"Listen," said the South Wind, "and you shall hear." 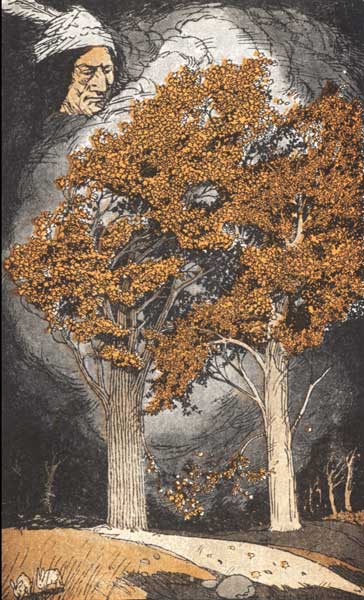 Thus it was that the Ash and the Maple learned that it was Mother Earth who gave them their life, and power, and strength, and that they were brothers, because they had one Mother.

If you use Facebook or Google+ & enjoyed What The Ash And The Maple Learned, please tell your friends and let us know to find more like it for you!