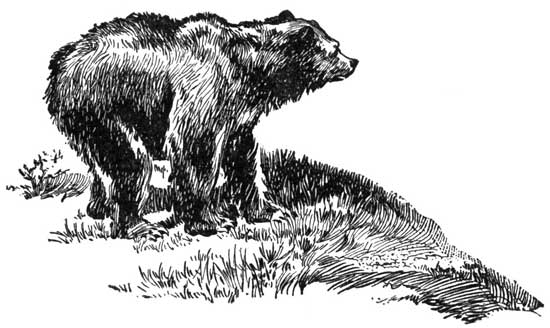 An Indian woman built a wigwam in the deep wood. She was a brave woman. She had no fear.

One night, she heard something coming along the trail. Thump, thump, thump, it came, to the very door of her wigwam.

There was a rap.

"Come in," said the woman, but no one entered.

Again there came a rap.

Again the woman called, "Come in." Again the latch was not lifted.

The next night, the same thing occurred. Soon after dark, the woman heard the thump, thump, thump, coming along the trail. Up to the very door of the wigwam it came.

Three times, a rap, rap, rap, was heard as before. Three times the woman answered, "Come in," but no one entered.

The third night, the woman thought she would make sure who was calling. She stood for a long time, with her hand on the latch.

At last she heard the visitor coming. Thump, thump, thump, it came along the trail. There were three raps.

"Come in," called the woman, but the latch did not move in her hand. She waited. Again came the raps.

This time she threw wide open the door, and there stood a great black bear. He showed his sharp teeth and growled, "Are you at home?"

The woman looked him straight in the eye and replied, "I am at home."

At once the bear turned on his heel and went down the trail, as fast as he could go.

If you use Facebook or Google+ & enjoyed How The Woman Overcame The Bear, please tell your friends and let us know to find more like it for you!