Flying Squirrel and Lightning Bow were two little Indian boys. They lived by Singing River, and they played from sunrise to sunset. They were as happy as the day was long.

In the summer, they fished and swam in Singing River, and they shot their arrows into chipmunk and woodpecker holes. Sometimes they played "Dodging Arrows," a game their mother had taught them when they were very young.

In the winter, they jumped into fleecy snowdrifts and rolled until their little bronze bodies took on a red-raspberry tint. Then they would send their snow-snakes skimming over the hard crust of snow.

Snow-snakes were small rods of wood, polished smooth with resin, oil, or wax. They could be thrown long distances. Long Moose-Lightning Bow and Flying Squirrel's father-could throw a snow-snake a mile and a half, over the crust of the snow. But the snow-snakes he used were eight feet long and tipped with lead.

It was the Moon of Berries. Six times had Flying Squirrel and Lightning Bow seen the Berry Moon hang her horn in the night sky. And not once in all their lives had they quarreled. 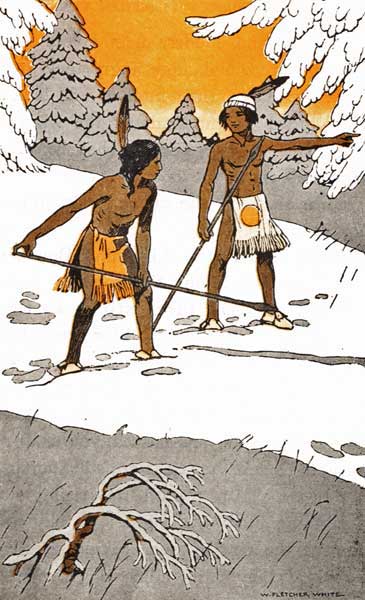 Louder and louder their voices were raised. More and more angry they grew.

White Fawn, their mother, was baking corn bread on the coals of the wigwam fire. The angry voices reached her ears. She stepped to the door.

Then she showed Lightning Bow and Flying Squirrel how to set up three sticks so they would stand for many days.

"Now go into the wood, set up your sticks, and leave your quarrel there," she said. "When the Berry Moon has passed, you shall return and see if the sticks are still standing.

Lightning Bow and Flying Squirrel went into the wood and set up their sticks. Then they began to throw balls with willow wands, and soon they were happy again. 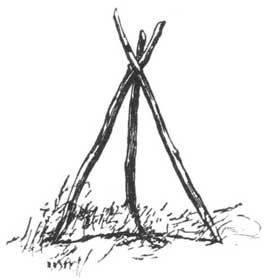 The sun had risen and set many times. The Berry Moon had passed. It was the Thunder Moon, when White Fawn said to Lightning Bow and Flying Squirrel, "Today you may go into the wood and see if your sticks are still standing."

Hand in hand, the two little Indian boys ran into the wood. They found only a heap of rotting sticks.

Flying Squirrel and Lightning Bow stood and looked at the sticks. They thought and thought.

"What did we set up the sticks for?" each asked of the other.

And for the life of them they could not remember what they had quarreled about, and why they had set up the sticks!

If you use Facebook or Google+ & enjoyed How Two Indian Boys Settled A Quarrel, please tell your friends and let us know to find more like it for you!