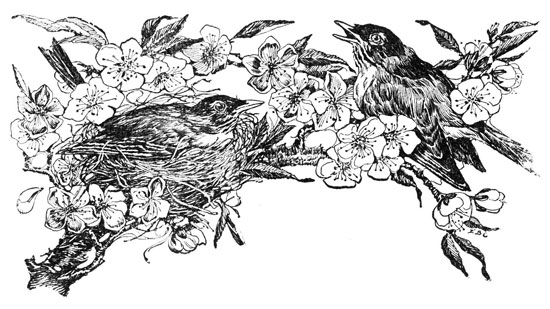 Some Indian hunters once made their way north, to hunt for moose. It was at the time of Falling Leaves.

They journeyed for several days, until they came to a lake. Close by the lake they built a log cabin. Moss was placed between the logs to keep out the wind, and a thick roof was made from hemlock boughs. In the center of the roof, a small opening was left for the smoke from the lodge fire to pass out.

Here the hunters lived during the Moon of Falling Leaves. Every day they went on the moose trail, but they found no moose. Their arrows brought them little game of any kind. They became discouraged and sick, and one by one the hunters lay down and died.

At last there was but one hunter left. He, too, was sick, and he grew weaker day by day. His food was nearly gone. It was growing cold, and there was little wood in the cabin to burn.

And some one did come and help him. His cry was heard, for a bird came flying in through the smoke hole in the roof of the lodge.

The bird had such a cheery, brave voice that the man felt better the moment he flew in. The bird said to the man, "I was near; I heard you calling. I have come to help you."

Then the bird saw that the fire was out, and that the man was cold. He fluttered among the ashes until he found a bit of live coal. With a glad chirp, he flew out through the roof. Soon he was back, with his bill full of dried twigs. He placed them on the fire and began to fan them into flame with his wings. Soon the twigs were blazing. Then he flew out for more twigs,-and more, and more, and more.

The brave little bird kept on carrying twigs until the fire burned hot, and the lodge was warm once more.

When the bird had flown into the lodge, he had had a clean, white breast. After the fire was built, his breast was covered with red and brown spots. He tried to pick them off with his bill, but they would not come off. Instead, they seemed to spread, and his whole breast became red-brown. Then the bird knew that he must have burned his breast to a red-brown, when he was fanning the fire into flame.

But the little bird did not care if he had soiled his white breast, and burned it red-brown. Had he not brought cheer and life to a dying man?

He chirped a few glad notes, then said to the man, "I will go now, but I shall be near your lodge. When you need me, call, and I will come again."

Later in the day, the man again called for help. The fire was getting low, and he was not yet strong enough to go out and gather twigs. Again the bird came to his aid. In and out he flew, many times, after small branches and twigs, until they were piled high on the fire, and once more it crackled and burned.

There was a little wood in the lodge. The man placed it on the fire, and the warmth healed the man, so that soon he was well and strong again.

Every day the man talked with the bird, for he was always near, and his cheery voice and brave words gave the man courage.

Once more he went on the moose trail, and this time his arrows brought him moose. In a short time the hunter had all the meat, skins, and moose hair he wanted. The moose hair he was taking to his wife, to work into pretty forms on moccasins.

The first snow was falling, as the hunter started south on the home trail. The bird hopped along by his side for a little way, then said, "I must leave you now. Winter is coming, and I must be on my way to the Southland, or the snow will catch me. In the spring you will see me again."

When spring came, the bird with the red-brown breast came with his mate, and built a nest close to the hunter's home lodge. In the nest, that summer, there grew up five little birds, and they, too, had red and brown breasts.

If you use Facebook or Google+ & enjoyed How The Robin Burned His Breast, please tell your friends and let us know to find more like it for you!