Far away in the North Sky lives Old Man Winter. Every year he leaves his wigwam in the sky and comes to earth.

At the foot of a mountain, he builds a lodge of ice and snow, which no human being, animal, or bird can enter. There he lives for a time.

North Wind is the only friend of Old Man Winter. When he passes near Old Man Winter's lodge, he gives a loud shriek, and with his blustering breath he blows open the door and enters.

Near a fire which glows, but does not warm, North Wind finds a seat. There he and Old Man Winter sit and smoke, and lay their plans for the next snowstorm.

When the council is ended, North Wind departs, to drive up the snow and hail from the corners of the earth.

Old Man Winter also leaves his lodge. He stalks over the mountains and valleys of the Red Children. The land becomes white with his breath. The rivers are stilled, and all the voices of the wood are hushed as he passes. A deep sleep falls upon every living thing.

No sound is heard in the forest but the rapping on the trees. Old Man Winter carries a great hammer, and he strikes the trees a blow as he passes. The colder it grows, the louder and more frequently he raps. The trees snap, and the Indian lodges crack with his blows. 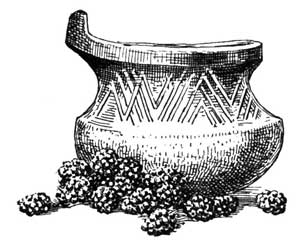 One day, as Old Man Winter was stalking through a forest, he came upon a hunter's lodge. For days the snow had been falling. No track of deer or rabbit was to be seen, and the hunter and his little boy sat within, weak from hunger. They were also very cold, for the fire in the lodge burned low.

Old Man Winter laughed and shook his hammer in glee, as he drew near. Once, twice, three times, he rapped. The little boy within heard him, and rapped three times in reply,-just as Old Man Winter had done.

At this, the hunter spoke. He told the boy that he must not mock a nature spirit, lest some harm should come to him. He might be captured and made to serve that spirit.

Now when Old Man Winter heard the mocking raps of the little boy within the lodge, he was very angry. He breathed fiercely upon the little lodge. It shrank and shivered at his touch like a living thing. He struck it several sharp blows with his hammer, and passed on.

The fire inside the lodge burned lower and lower. The hunter and his little son drew closer and watched the last flame flicker and die out.

As they sat by the ashes, numb with the cold, all of a sudden a new warmth filled the lodge. The South Wind gently opened the door, and a young chieftain, with a face like the sun, entered. He saw the dying hunter and the boy, and he warmed them back to life. When they were stronger, he helped them to rekindle the fire. Then he told them to take a few dried blackberries that they had in the lodge, and boil them in water.

He said they must eat a portion of the blackberries, and throw the rest at Old Man Winter when he returned. This would frighten him away, for he was terribly afraid of blackberries. 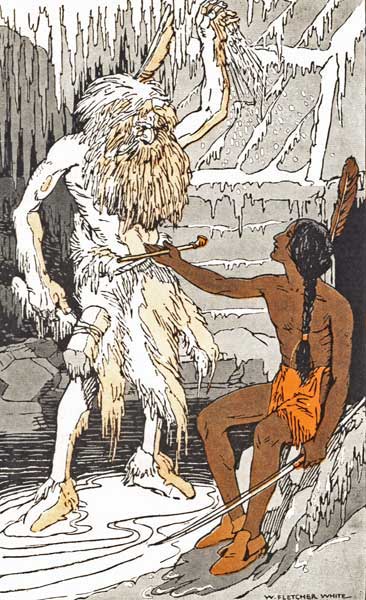 Blackberries mean sunshine and summer heat. Old Man Winter cannot stay where they are. He never visits the earth at blackberry time.

The hunter and the little boy said they would do as they had been told. Soon the young chieftain left the lodge, with the South Wind.

Not many days later, Old Man Winter returned, and again came rapping at their lodge. But this time the hunter and the little boy were ready. They threw the blackberries at him, as they had been told, and he ran in fear to his ice lodge.

The South Wind and the young chieftain with a face like the sun were near. They followed close upon the Old Man's track. When he was again inside the ice lodge, the South Wind rapped gently at the door.

"Begone!" said the Old Man. "No one but North Wind is welcome to my lodge."

Then the South Wind breathed soft and warm upon the door of the ice lodge, and it melted at their feet. The young chieftain passed in and sat down by the strange fire that had no heat. The South Wind stayed without, and sang, soft and low.

The Old Man was very angry. He raged about the lodge and ordered the young chieftain with sunshine in his face and warmth in his breath to depart.

"I am great and powerful," said the Old Man. "When I touch the sky, the snow falls. When I speak, hunters hide in their lodges; animals crawl into their holes; and birds fly in fear.

"When my hand touches the earth, it grows cold and hard, and all life dies. Begone! or I will make an ice man or a snow man of you."

But the young chieftain moved not. He only sat and smiled at the bluster of the Old Man.

Slowly he filled a pipe, and handed it to the Old Man, saying, "Here, smoke with me. It will give you strength to go to your lodge in the North Sky. It is time for you to depart. You are old, and tired, and worn. You and North Wind have had your day. The days that are to come belong to South Wind and to me.

"I, too, am powerful, and I am young! I do not fear you. When I touch the earth, it grows soft and warm. Every living thing stirs in its sleep,-birds and bees, flowers and trees, animals and men. When I speak, the sleeping sun awakes. See! already he begins to send down his arrows. Hasten! that they may not find you, on the trail to the North Sky."

The Old Man trembled. His legs and arms grew weak. Icicles fell from his beard. Great tears rolled down his cheeks.

"Who are you?" he whispered, as he was melting at the young chieftain's feet.

"I am Go hay-the Spring," answered the young chieftain. "All the earth is glad, when I come to drive you back to your lodge in the North Sky, for I bring sunshine, and love, and joy."

But the Old Man did not hear. He was far on the North Sky trail, and Spring and South Wind were masters of earth.

If you use Facebook or Google+ & enjoyed How Old Man Winter Was Driven Back, please tell your friends and let us know to find more like it for you!