Once the Little People, the Indian fairies, ran with the Red Children through the woods, and played with them beside the streams. Now they are not often seen, for the white man drove them out of the woods with the Indians, and away from the waters, with his big steam noises.

But before steamboats and great mills were on the streams, the Little People were there. They were often seen paddling their tiny canoes, or sliding down the great rocks on the banks. They loved to slide down a bank where one rock jutted out, for then they had a big bounce. They also liked to sport and jump with the fish.

There was a young Indian girl whose name was Morning Star. She was called Morning Star because her face was so bright, and she was always up early in the morning.

Morning Star lived with her father in a comfortable wigwam by a river. Every day she would get up with the sun, and run down to the river where the great rocks were, to catch fish for breakfast.

Morning Star caught her fish in a basket. At night, she would go and fasten her basket between the rocks, in a narrow place of the stream. Then, when the fish swam through in the night, they would get caught in it, and Morning Star would find plenty of fish waiting for her. In the morning, she would take the basket of fish back to the wigwam, and soon the smell of fish frying on hot coals would come from the lodge.

On this morning, the Indian girl was up as usual with the sun. She ran down the river just as the Great Spirit lifted the sun's smiling face. Morning Star had such a light heart that she was glad just to be alive, and she sang a song of praise as she ran. All true Indians at sunrise lift their arms and faces to the sun, and thank the Great Spirit that he has smiled upon them again.

Happy and fleet as a deer, Morning Star ran on until she came to the great rocks. There she saw a whole tribe of tiny little folk gathered about her basket. Some of them were perched on the sides of the basket, laughing and singing. Others were lifting the fish from it and throwing them into the stream. Still others were opening and closing the splints of the basket for the fish to slip through.

Morning Star knew that these tiny folk were the Jo gah oh. She knew also that these Little People were friends of the fish. They know every twist of a fish net and every turn of a hook. Often they have been known to set fish free, and to guide them into deep, quiet places, far away from the men who fish.

Morning Star called to the Little People and begged them not to let all the fish go. Then she began to climb down the rocks, as fast as she could. The little Chief called up to her, "Fish, like Indian girls, like to be alive."

Then he told the Little People to keep on setting the fish free.

When Morning Star reached her basket, a few fish were still in it. She put out her hand to take them from the Little People,-and not a fish, nor a Jo gah oh was to be seen. The Little People had darted into the rocks, for they go through anything, and the fish had slipped through the tiny spaces between the splints of the basket. 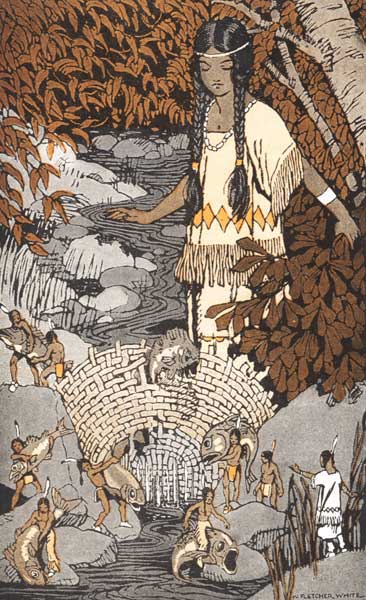 Morning Star heard the laughter of the Little People echo deep within the rocks, for they like to play pranks with the earth children. And far down the stream, she saw the fish leap with joy at being still alive. She took up her empty basket and went back to the wigwam.

That morning for breakfast, Morning Star baked corn cakes on the hot coals. As she ate the hot cakes, she thought they tasted almost as good as fish.

Ever after, when Morning Star saw a fish leap from the stream, she remembered what the Jo gah oh had said: "Fish, like Indian girls, like to be alive."

If you use Facebook or Google+ & enjoyed How Morning Star Lost Her Fish, please tell your friends and let us know to find more like it for you!