Once a tribe of the Iroquois became very warlike and cruel. They liked to follow the warpath rather than the hunting trails.

These warriors thought only of the war dance. They forgot to give thanks for the sweet waters of the maple, and for the planting season. Neither did they remember to praise the Great Spirit, in song and dance, for the juicy strawberries, and the waving green corn, as once they had done.

To fight was the one desire of their lives, the one thought that filled their minds. They boasted that none were so fierce and bloodthirsty as they.

"Our arrows fall like leaves of the pine," they said, "and always are they red with blood. Our war shirts have many scalp locks on them."

One day, a dispute arose with a neighboring tribe of their nation. The Peace Wigwam was not far away, but these warriors would not take their quarrel to it, as was the custom. The fighting Indians would have none of the Peace Wigwam.

"Let the women and papooses sit in the sun at the door of the Peace Wigwam," they said scornfully. "Chiefs are for the warpath."

A fierce cry was raised, and the war dance was begun. The chiefs painted their bodies, donned their war shirts, sharpened their tomahawks, tipped their arrows, and tightened their bowstrings. 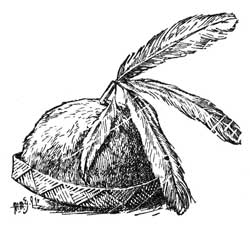 But by the time they had made ready, the sun had set, and the blanket of darkness had fallen upon them. A council was quickly called. It was decided that they would not start to war until moonrise. So the warriors lay down to sleep.

As they slept, another council was called. This was not a council of men, but of mice.

From long and short trails they came, hundreds and hundreds of mice, for all had heard the warriors boast of their strength.

"Now," said the mice, "we will show these boasters how weak are men, and how strong are little mice."

When all the mice were gathered about the council tree, the leader spoke thus: "My brothers, listen! The Great Spirit did not give men strength, that they should fight and kill one another. The Great Spirit did not make men powerful, that they should strike down and kill the weaker animals. Let us show these fierce warriors that it is the weak who are strong, and the strong who are weak. Let every mouse destroy at least one weapon before the moon shall rise."

At this, all the mice set to work. Snap, snap, snap, went the bowstrings on all sides. Then the sharp little teeth began on the feathers that winged the poisoned arrows. Soon the feathers lay in bits about the ground.

Next, the deerskin cords that bound the sling shots were cut in two, and before the moon had risen, every weapon had been made useless; every Indian had been disarmed,-and the mice had scampered away.

The warriors awoke. Again the war cry was raised. They sprang to their feet and seized their weapons, but found them useless. Their bows had no strings; their arrows, no wings; their slings, no cords.

The warriors who boasted that they were the strongest and fiercest on the earth, had been made powerless by mice.

If you use Facebook or Google+ & enjoyed How Mice Overcame The Warriors, please tell your friends and let us know to find more like it for you!